“Me Mumbo, best shaman in all game. Can help Banjo and filthy feathered one.”
—Mumbo Jumbo, Banjo-Kazooie

Mumbo Jumbo, or simply Mumbo, is a skull-faced shaman and one of the main supporting characters in the Banjo-Kazooie series. He first appears in Banjo-Kazooie and has since appeared in every game of the series. Mumbo has a different role in each game, and usually assists Banjo and Kazooie with either spells or transformations. Mumbo lives inside of a large structure shaped like his head, Mumbo's Skull.

In Banjo-Kazooie, Mumbo appears in five worlds, and has his name in the title of the first world, Mumbo Mountain. In each world that Mumbo appears in, he is found in Mumbo's Skull. If Banjo visits with enough Mumbo Tokens, he can get Mumbo to transform him by standing on a small skull-shaped switch. The player must press

for Mumbo to transform Banjo.

The five worlds each have their own transformation: Termite (Mumbo's Mountain), Crocodile (Bubblegloop Swamp), Walrus (Freezeezy Peak), Pumpkin (Mad Monster Mansion), and Bee (Click Clock Wood). Occasionally, Mumbo's magic fails, causing him to transform Banjo into a Washing Machine, although he quickly fixes the mistake. Mumbo sometimes mentions that he would transform Banjo into a T-Rex but changes his mind.

In the Game Over sequence, after Gruntilda succeeds in transferring Tooty's beauty through the Beauty Steal Machine, Mumbo appears, offering her a flower and to go to Mumbo's Skull with him. 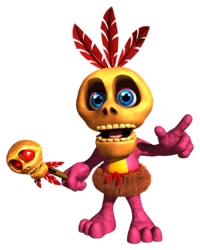 In Banjo-Tooie, Mumbo is first seen during the game's introduction sequence, playing cards in Banjo's House with Banjo, Kazooie and Bottles. Mumbo notes he has "much of bear's cash" already, leading to Kazooie lying about Gruntilda being outside the house to distract the rest of the players while she steals tokens. Eventually, the four hear the Hag 1 arriving Spiral Mountain, and Mumbo leaves to investigate. While outside, he sees Mingella and Blobbelda destroying the boulder that kept their sister trapped underground, but is noticed once he tries to leave to tell the others and ends up being chased by Grunty. While he reenters Banjo's House to warn the others, the witch charges a powerful spell outside, which Banjo believes and leaves the house to avoid, taking Kazooie with him. Bottles thinks it's just another trick to take his tokens, though, and stays, dying in the process. As the sun goes up, Bottles walks out the house and falls down in the ground, dying. Mumbo states that Gruntilda must pay, and so the duo go after her.

Mumbo Jumbo was first made a playable character in this game, and thus appears in every level in the game. As his rival Humba Wumba took over his role from the first game, he now has the power to manipulate various objects or creatures throughout the levels, as opposed to turning Banjo and Kazooie into different forms. His magic receives its power from small magical creatures called Glowbos, which Banjo and Kazooie must bring him another one of each time they seek out his help. His skull has also been remodeled as well, and now has a second story, accessed by a ramp from the first floor. When Banjo and Kazooie seek out his help, they will need to throw a Glowbo they have collected into Mumbo's bag, and he will then become available for the player to use in that particular level. When he leaves his skull and goes out into the level, he must find and step on a Mumbo Pad, which allows him to cast powerful magic, and can be found throughout the level in varying locations and numbers. When he steps on a Mumbo Pad, he can perform any of the following spells: Summon (Mayahem Temple), Levitate (Glitter Gulch Mine), Power (Witchyworld), Sunlight (Jolly Roger's Lagoon), Enlarge (Terrydactyland), EMP (Grunty Industries), Life Force (Hailfire Peaks), Rain Dance (Cloud Cuckooland), and Heal (Isle O' Hags). Aside from performing a spell, Mumbo cannot do much else other than jump, swim, or attack with his wand. When he is done performing spells for the time being, the player can return him to his skull and put him in his chair. The next time the player requires his assistance, they only have to go talk to him in his skull again.

After Banjo and Kazooie have finally defeated Grunty yet again, he shows up at Bottles' house with Banjo, Kazooie, Jamjars, and Humba Wumba prepared for the party. However, they all quickly realize that there will be no party, as Klungo has eaten everything. Mumbo for some reason blames Wumba for this, and after she threatens to turn him into a frog, he says that he'll summon a large golden statue to kick her butt. Eventually, the five of them end up going back to Cauldron Keep, where they play a game of kickball with Grunty's head.

Mumbo is also a playable character in multiplayer. In Squawkmatch, he is a middleweight character.

In Banjo-Kazooie: Grunty's Revenge, Mumbo first appears in the opening sequence, where his role is similar to that of Banjo-Tooie's. He witnesses Klungo free Grunty's spirit into the Mecha-Grunty suit, and he hurries back to Banjo's House to warn him and Kazooie. After Mecha-Grunty kidnaps Kazooie and goes into the past, Mumbo uses his magic to create a time portal, so that Banjo can follow Grunty into the past and rescue Kazooie. Right as Banjo enters the past, he meets Bozzeye, who mentions that Mumbo sent him a letter telling him about Banjo.

During Banjo's adventure, he can find Mumbo inside his skull (renamed to Mumbo's Pad). The younger Mumbo is training to become a witch doctor. There are four transformations; Mouse, Candle, Octopus, and Tank — which can be unlocked with Mumbo Totems. Unlike Banjo-Kazooie, Mumbo allows Banjo to select his transformation, regardless of the world, provided that Banjo had already unlocked that transformation. If Banjo is transformed, he has the option to change his transformation or return to normal. While Banjo is transformed, the game limits where he can go. If Banjo crosses a boundary, a Mumbo icon with an X is displayed on-screen, and then Banjo is automatically taken back to a place within the boundaries.

In the game's ending, Mumbo uses his magic to return Banjo into the present.

In Banjo-Pilot, Mumbo Jumbo is a playable character and is available from the start, having average top speed and handling and low acceleration. Mumbo Jumbo is the boss of Cauldron Cup, being fought at the end in the match "Mumbo Maul." During the battle, when Mumbo Jumbo is flying in front, he sends behind whirlwinds that work like Single Blue Ice Eggs.

In Banjo-Kazooie: Nuts & Bolts, instead of being involved with magic, Mumbo is instead a vehicle mechanic. In Showdown Town, he runs Mumbo's Motors and can open the Mumbo Crates that Banjo and Kazooie bring him.

In Banjoland, Mumbo plays "The One With Ideas Above His Station." In Act 6, he hosts the challenge "Mumbo's Stunt Spectacular" where he needs Banjo and Kazooie to perform various stunts with a pre-made vehicle and entertain the new visitors.

In L.O.G.'s Lost Challenges, Mumbo plays "The Self-Styled Ladies' Man." In Act 1, he hosts the challenge "Big Rimmed Race Off," where Banjo and Kazooie need to race him, Bottles and Humba Wumba. 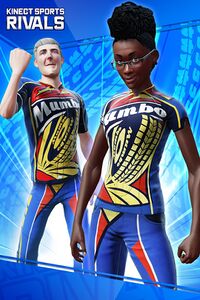 In Kinect Sports Rivals, Mumbo Jumbo appears in the Banjo-Kazooie Challenge Pack and offers to sponsor the player's Champion, challenging them to three events which make use of the Mumbowl ball. Once they are all won, both a large amount of Coins and the Mumbo Bowling outfit are obtained.

In Super Smash Bros. Ultimate, Mumbo Jumbo can sometimes appear in the background of the Spiral Mountain stage, standing in different spots and juggling his eyeballs. He also appears as a Primary Advanced spirit, whose battle is against a Gold Mii Swordfighter and a R.O.B. who, while in the internacional release is giant and golden, has no special effects or transformations in the Japanese, Chinese and Korean versions. The battle conditions are that only the main fighter needs to be defeated in order for the battle to be won, the player constantly takes minor damage and the enemy favors air attacks.

In Viva Piñata and Viva Piñata: Trouble in Paradise, there is an item called a "Dastardos Scarer," which is a statue of Mumbo. A concept artwork from Ryan Stevenson reveals that Mumbo was planned to appear physically in the first game, but was eventually scrapped.[2]

Mumbo has pink skin and wears a yellow skull, which has three red feathers on top. In Banjo-Kazooie, Mumbo is larger than both Banjo and Kazooie. In Banjo-Tooie, Mumbo's size was made both thinner and shorter, around the size of Banjo, and his skull is more rounded.

In Banjo-Kazooie: Nuts & Bolts, Mumbo Jumbo wears blue overalls in Showdown Town and L.O.G.'s Lost Challenges. In LOGBOX 720, he has a goatee and wears a gray cap with a red, Space Invaders-like alien and gray overalls with red and green buttons. In Banjoland, he wears a green and brown cap with a Jiggy, a brown shirt and green overalls with yellow buckles and also with Jiggies in them. At one point in development, he also had a Mumbo's Motors tattoo on the side of his skull.[3]

Mumbo is generally friendly, although he has animosity toward Humba Wumba, as both regard themselves to be more powerful than the other. He always speaks in the third person, and does not refer to characters by their name. Like many characters, Mumbo refers to Banjo and Kazooie as "bear" and "bird" respectively. He sometimes jokes about what he transforms Banjo into.

Mumbo's two main phrases are "Eekum-bokum" and "Oomenacka." His speech is made up of cut-up samples of Grant Kirkhope's voice that would later be used on the background theme of Mayahem Temple in Banjo-Tooie, in which Kirkhope is actually saying "Come and have a go if you think you're hard enough," a famous English football chant.[4]