Spiral Mountain is a signature location of the Banjo-Kazooie series, having appeared in every game. The location is named after its main landmark of a large spiraling hill located in the center. Spiral Mountain is also where Banjo and Kazooie live, as well as Banjo's pet goldfish Roysten.

Spiral Mountain is the starting location in every Banjo-Kazooie game. It is also a tutorial area, where the player is taught basic controls and moves. Spiral Mountain is a grassy area featuring a vegetable orchard, a quarry, two waterfalls forming a lake (an alcove appears behind one of them), a few tree stumps, and Banjo's House. There is a moat surrounding the main spiraling hill. There is a rickety, wooden bridge connected on top of the hill, connected to a large stone structure of Gruntilda's face. The mouth of the structure leads into Gruntilda's Lair.

A view of Spiral Mountain in Banjo-Kazooie 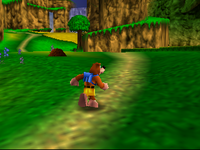 In Banjo-Kazooie, the game introduction takes place in Spiral Mountain, and is where Grunty kidnaps Tooty. During gameplay, this is where Bottles teaches some basic moves to the duo, including Claw Swipe, Forward Roll, Rat-a-tat Rap, Feathery Flap, Flap Flip, and Beak Barge. After Bottles teaches them the six moves, they must go on top of the spiraling hill, where Bottles repairs the bridge to Gruntilda's Lair. From there, the duo can continue onward into the lair.

From the first molehill, Bottles gives Banjo and Kazooie an option to learn the six moves. Alternatively, by deciding against it, Bottles, provides them with all six moves, and the duo can directly skip to meeting him at the top of the spiraling hill.

After Banjo and Kazooie learn every move (or acquire them from the first molehill), Colliwobbles, Toppers, Bawls, and Quarries appear as enemies around the location. Contrary to Bottles' training, they are able to injure Banjo and Kazooie.

In the end, after Banjo and Kazooie defeat Grunty in the final boss battle, she falls off the tower and into the ground of Spiral Mountain. A large rock falls from above, trapping her below. 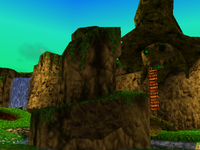 Spiral Mountain in Banjo-Tooie, after being damaged by Grunty and her sisters.

In Banjo-Tooie, Spiral Mountain is heavily damaged by the Hag 1, a machine operated by Grunty's sisters, Mingella and Blobbelda. In the opening cutscene, the sisters drill through Spiral Mountain's cliffs, and they lift up the rock that trapped Gruntilda beneath the ground and free Grunty. In an act of vengeance, Gruntilda uses a spell to destroy Banjo's House. Her sisters release Minions and Gruntydactyls into the area, instructing them to destroy Spiral Mountain further, and the sisters leave Spiral Mountain. The bridge to Gruntilda's Lair is no longer connected from the spiraling hill, likely because the Hag 1 broke it off. The bridge is hanging out of the mouth of Gruntilda's Lair, somewhat like a tongue. Banjo can use the bridge like a ladder and climb it to reach the mouth of Gruntilda's Lair.

During Spiral Mountain's destruction, Roysten became trapped beneath a boulder. Later on, when the duo learn Bill Drill, they can break open the rock and free Roysten. As a reward, Roysten teaches them the Fast Swimming ability.

There are two Banjo-Kazooie Game Paks in Spiral Mountain, and by destroying them, Banjo and Kazooie can respectively obtain the blue and the purple Mystery Egg. Spiral Mountain only has one Jinjo, which is located behind a Talon Torpedo Door.

Spiral Mountain's melody is generally the same as in Banjo-Kazooie except for being in minor key to fit the ruination and melancholic atmosphere of the location. 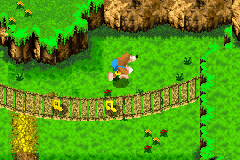 Banjo exploring Spiral Mountain in the past.

In the midquel, Banjo-Kazooie: Grunty's Revenge, the game starts in Spiral Mountain, set two months after Grunty was trapped beneath a rock. Klungo designed the Mecha-Grunty suit as a way to transplant Grunty's spirit, to free her beneath the rock. Mecha-Grunty kidnaps Kazooie and goes back in time, hoping to prevent the duo from meeting. Mumbo Jumbo uses his magic to also send Banjo back in time.

Banjo ends up in a past version of Spiral Mountain, which has an entirely different appearance from the present one. Banjo meets Bozzeye, the ancestor of Bottles; by having at least ten Musical Notes and visiting the next molehill, Banjo learns Pack Whack, which is the only new move he learns in Spiral Mountain.

Honey B's Hive is located in Spiral Rise, where Banjo can exchange his Hollow Honeycombs for additional honeycomb segments to his health bar. The Jinjo Oracle of Spiral Mountain appears on a ledge to the north of Jiggywiggy's Temple. The five Jinjos of Spiral Mountain are purple.

There are six enemies in Spiral Mountain and its higher locations, including: Beehives, Boom Boxes, Gruntlings, Gruntweeds, red Spookos, and Whiplashes. This is the most enemies who Spiral Mountain has of the other Banjo-Kazooie games.

In Banjo-Pilot, the Spiral Mountain track is included as the very first course. It is the first course of the Honeycomb Cup, otherwise the Pumpkin Cup in Grunty GP. The theme is entirely different from the usual Spiral Mountain theme, as it was originally composed for some jungle race tracks in the 2003 Diddy Kong Pilot.

In Banjo-Kazooie: Nuts & Bolts, Spiral Mountain is shown to have partially recovered from the damage it took in Banjo-Tooie. Due to landslides, the area is littered with boulders, some of which block entrances to locations in previous games. The bridge to Gruntilda's Lair is missing altogether. The waterfall has receded and no longer flows into the basin around Spiral Mountain, causing it to be overrun by algae and sea grass. Banjo's House has been poorly renovated and is cluttered with items including Xbox 360's in the interior. (Possibly a joke on how the 360 when heating up can cause it to put, deep red rings on inserted disks.) The fence around the house is damaged in spots and a large garbage bin lays off to the right side filled with wooden pallets, pizza boxes and cases of multiple Rare games including Grabbed by the Ghoulies and Viva Piñata. Banjo and Kazooie can return to here from Showdown Town if they have at least 75 Jiggies. Bawls are the only regular enemy in this area. This is the setting of where Banjo and Kazooie engage in a final battle against Gruntilda, and is also where the ending cutscene takes place. Mumbo Jumbo, Bottles, Piddles, Jolly Dodger, Captain Blubber, Trophy Thomas, Humba Wumba and the Jinjos appear here during the ending. After completion of this world, Banjo will be outfitted with a tuxedo and Kazooie with a bow tie for the remainder of playtime even after turning the game off.

Spiral Mountain appears as a stage in Super Smash Bros. Ultimate as DLC, bundled with Banjo-Kazooie as part of Challenger Pack 3. In it, many characters such as Mumbo Jumbo, Tooty, Gruntilda in her broomstick, flying Jinjos, Bottles and a Buzzbomb appear in the background.

Six of the Best: