“Banjo! The Jinjos are freed at last! We'll spread the news that Grunty's gone and we can reclaim our homeland! Thank you bear and bird! Wheee!”
—Jinjo, Banjo-Kazooie: Grunty's Revenge

Jinjos are a recurring species in the Banjo-Kazooie series. They are usually found throughout the worlds in need of help and reward Banjo and Kazooie once they have been aided.

The name "Jinjo" originated from a nickname Grant Kirkhope gave to artist Ed Bryan during the development of Banjo-Kazooie.[1] They were originally invisioned as birds, but Ed Bryan, as he stated, "wasn't much good at drawing birds."[2]

In Banjo-Kazooie: Grunty's Revenge, it is said that the Jinjos used to live in Spiral Mountain before Gruntilda arrived and took over, forcing them to move away. A broken statue of King Jingaling's head in front of Gruntilda's Lair can also be found in the game, implying the witch broke it to build the entrance to her home in its place.

In Banjo-Kazooie, which is their debut appearance, Jinjos are featured in five colors — blue, green, orange, purple, and yellow — and there is one of each in every world. In Mumbo's Mountain, when Banjo and Kazooie collect their first Jinjo, it tells the duo that Gruntilda placed them in each world. When the duo rescue all five Jinjos in a world, they are rewarded a Jiggy, or an Extra Life if those Jinjos were rescued beforehand. Whenever Banjo and Kazooie leave a world, the Jinjos return to their original locations, but if they have not collected all five Jinjos, they are required to start over once they re-enter the world. In the Xbox Live Arcade version, like other collectible items, Jinjos remain collected, even if Banjo and Kazooie leave and re-enter a world.

In the final battle against Gruntilda, Jinjos appear in the fourth phase to help the duo. They are the only way to destroy a magical barrier that Grunty has created around herself, but doing so requires the duo to shoot eggs into each of the four Jinjo statues, causing a Jinjo to emerge from each one. Each Jinjo then attacks Grunty's shield, weakening it and eventually destroying her broomstick. During the fifth phase, a large Jinjo statue named The Mighty Jinjonator appear in the middle of the arena. After emerging from its statue, the Mighty Jinjonator repeatedly attacks Gruntilda and defeats her. 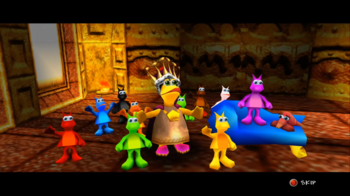 In Banjo-Tooie, Jinjos were given a larger role. They live in Jinjo Village, and each color variant has their own family. They are ruled by a large, sovereign Jinjo named King Jingaling. The game also introduces an evil counterpart, Minjos, who disguise themselves as Jinjos and try and attack Banjo when he gets nearby.

Once Kazooie learns the Hatch ability, she can hatch the yellow egg inside of Heggy's Egg Shed. By doing so, Heggy tells her that a Jinjo is now an available character for the Breegull Blaster shootout matches in Multiplayer. In this mode, Jinjo is the smallest and fastest character, but also the most vulnerable, having only four units of health.

In Banjo-Kazooie: Grunty's Revenge, when Mecha-Grunty goes into the past, she scares off all the Jinjos, leaving the Jinjo Oracle by herself. She relies on the Jinjos for gossip because she cannot move around due to being a statue. Like Banjo-Kazooie, every world has five Jinjos, although each world features Jinjos of a different color. When Banjo and Kazooie collect five Jinjos in a world, the Jinjo Oracle rewards them with a Jiggy.

During the 100% ending, three purple Jinjos can be found in front of Banjo's House commemorating that they'll finally be able to reclaim their homeland as Gruntilda was defeated.

In Banjo-Pilot, a purple Jinjo is a playable character, and is simply named "Jinjo." It is one of the four starter characters. Jinjo has very low top speed but high acceleration and handling.

There is an unlockable Jinjo GP mode, where the player's racer must race against seven Jinjos, each of a random color. The mode can be unlocked after completing the Broomstick Cup of Grunty GP and paying 500 Cheato Pages to Cheato.

In Banjo-Kazooie: Nuts & Bolts, Jinjos have a different role than in previous Banjo-Kazooie titles. Instead of collecting Jinjos, Banjo must find them and complete a challenge on their behalf, which varies from going over a set speed to making them roll a certain distance. Completing a Jinjo's challenge earns him a Jinjo Token, which can be used in Showdown Town for King Jingaling's Bingo Palace.

In Showdown Town, there are six Jinjos locked up in cages. Banjo must free them with a Wrench-it Bolt and take them to their homes. After freeing a Jinjo, Banjo must carry a Minjo and imprison it in place of the Jinjo.

Jinjos reappear in Super Smash Bros. Ultimate as a part of Banjo and Kazooie's Final Smash. Similar to their role during the final boss battle in Banjo-Kazooie, four Jinjos and the Mighty Jinjonator continuously attack any opponent caught in the attack before the Jinjonator deals the final blow.

Jinjos come in a variety of colors. In Banjo-Tooie, it is shown that each color variant is part of a family, and they live together in Jinjo Village.

Jinjos are generally very cheerful and, although often helpless, eager to help in dangerous situations (for example in Banjo-Kazooie, where during the final battle against Gruntilda, the Jinjos appear to aid Banjo and Kazooie in the fight). In Banjo-Kazooie: Nuts & Bolts, Jinjos have various challenges where they need help, and are described as "remarkably clumsy" in the description of Jinjo Fetch events.

Jinjos are considerably small creatures with long snouts and circles in their torsos that have different colors than the rest of their bodies. They have two arms with four fingers in each hand and two legs with three fingers in each foot. Most of them have light blue eyes, with some exceptions like the Mighty Jinjonator or King Jingaling. 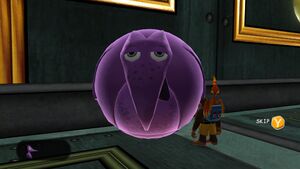 A Purple Jinjo transformed into a ball, in the LOGBOX 720 Game World of Banjo-Kazooie: Nuts & Bolts.

Jinjos have shown a variety of powers throughout the Banjo-Kazooie series. They can freely fly and teleport (doing this mainly in Banjo-Tooie, where they immediately appear in their houses after being rescued), leaving trails of colored sparkles behind after performing both actions. In Banjo-Kazooie, the Jinjos are shown to be strong enough to damage Gruntilda even after she activates her magic barrier. In Banjo-Kazooie: Nuts & Bolts, they transform themselves into balls, and do that mostly to race against Banjo and Kazooie or be thrown in Jinjo Hurling challenges.