Clanker is a large mechanical whale who reluctantly serves as Gruntilda's garbage grinder in Banjo-Kazooie. Contrarily, according to Gregg Mayles, Clanker is a "whark," a hybrid between a shark and a whale.[2]

Clanker has an outward metallic shell held together by individual tiles. Despite his mechanical appearance, Clanker also has some exposed flesh on the sides of his body, which is supported by his whole interior, entirely made up of organic material. Although Clanker is a whale (which is also mentioned in a Grunty's Furnace Fun question), he also sports the gills of a fish and the teeth and fin of a shark. However, Clanker still retains some features. Clanker can move his eyes wherever Banjo goes.

Banjo and Kazooie swimming to the side of Clanker

In Banjo-Kazooie, Clanker is bound to a massive chain in the large, central room of Clanker's Cavern. Most of the level is centered around him, as the level title suggests. Almost his entire body is submerged underwater. When Banjo and Kazooie first encounter Clanker, he explains his unfortunate circumstance of breathing in unclean water and wants to breathe in clean air instead. To free him, Banjo and Kazooie must swim far downward into a circular area where Clanker is chained from. To free him, Banjo must turn a large key by swimming through its loop three times. By doing so, Clanker moves up to the water surface, and a Jiggy appears on his back as a reward for Banjo and Kazooie to obtain.

After the duo obtain the Jiggy, Clanker asks for their help again and complains that his teeth are hurting because he ate too much garbage. There are two floating platforms, with each one respectively positioned on Clanker's left and right side. Kazooie must fire an egg into Clanker's two gold teeth to knock each one over; each tooth is adjacent to one of the platforms. After firing at both teeth, Clanker tells the duo that he feels better and thanks them.

The duo can enter inside Clanker through either opening and explore Clanker's large interior. When Kazooie fires an egg at his right gold tooth, Clanker tells them that he swallowed a reward. By entering from this side, Banjo and Kazooie can obtain another Jiggy, which is placed at the tip of Clanker's knocked over gold tooth. Banjo and Kazooie can enter from either side to explore the interior of Clanker. The inside of Clanker features a couple of enemies, including Snippets, Whiplashes, and even some hazards such as rapidly spinning blades. There a few exits inside of Clanker that lead Banjo and Kazooie out from his gills.

Banjo and Kazooie can obtain a third Jiggy from Clanker by standing atop the large bolt that he breathes in and out of his blowhole. When Clanker spits up the bolt, Banjo and Kazooie are carried up to a small, narrow area with a Jiggy.

Clanker makes a cameo appearance in the background of the Clanker's River course in Banjo-Pilot. His flesh chunks are shown in a more reddish-orange color. 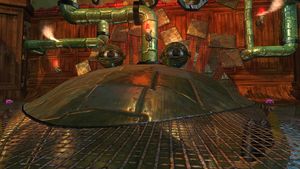 A portion of Clanker as shown in a Banjoland exhibit in Banjo-Kazooie: Nuts & Bolts.

“Clanker was the star of his very own level, Clanker's Cavern in Banjo-Kazooie. Getting him here in one piece was difficult, but the many uses of his ramp-shaped head made it all worthwhile.”
—Infopost, Banjo-Kazooie: Nuts & Bolts

Clanker returns as a Banjoland exhibit in Banjo-Kazooie: Nuts & Bolts. Here, L.O.G. has separated his body parts into different sections. His head is sticking out of the wall, his teeth were made into a separate display, the portion of his body with spinning blades serves as a tunnel, and the remainder of Clanker is lodged into the ground as a ramp and bridge. His blowhole appears to be absent.

Clanker is featured in the "You'll Go Blind, You Clanker..." challenge. In it, there are Gruntbots who attempt to steal Clanker's eyes, and Banjo and Kazooie's objective is to prevent them from doing so.