This article requires cleanup in order to qualify for Jiggywikki's standards.
Reason: Wikia and too much trivia
You can discuss this issue on the talk page or edit this page to improve it.

Freezeezy Peak is the fifth world Banjo and Kazooie visit in Banjo-Kazooie. The entrance is located on the sixth floor of Gruntilda's Lair through a snow white passage. Its picture is located in the Bubblegloop Swamp entrance area, through a passage behind the main hut. This passage is filled with piranha water, so make sure you equip the pair of Wading Boots found near the Gruntling to make it through unharmed. Alternatively, you can use the crocodile transformation to traverse the waters (or bounce through the water while taking the hits). The picture requires 8 Jiggies to complete. 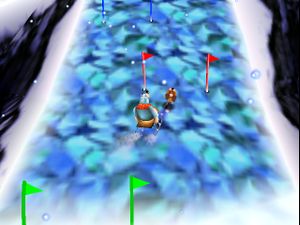