Kazooie is one of the two eponymous starring characters of the Banjo-Kazooie series, along with Banjo. She is a red-crested breegull who lives in Banjo's backpack, and stays in it most of the time. Like Banjo, Kazooie is also named after a musical instrument, the kazoo. Incidentally, Kazooie plays the kazoo in the start-up sequence of Banjo-Kazooie, although it more closely resembles a bugle. The word "bugle" is phonetically similar to "breegull," but it is unknown if this was a coincidence.

Kazooie first appears in Banjo-Kazooie. In the prologue, Tooty wants to go on an adventure with Banjo, which Kazooie also wants to do. When Gruntilda kidnaps Tooty, Kazooie anxiously tries to wake up Banjo, and they start their adventure to rescue Tooty.

Bottles teaches moves to both Banjo and Kazooie along the way. Kazooie has an essential role during the adventure, as she learns to fire eggs, reach higher areas, and fly in the air. Kazooie is rude to most of the characters, especially Bottles, and calls them insulting nicknames. 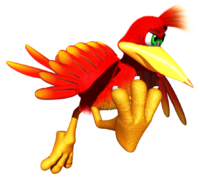 In the prologue for Banjo-Tooie, Kazooie is playing poker with Banjo, Bottles, and Mumbo Jumbo in Banjo's House. Kazooie is losing, so tricks Bottles by alerting him that she can see Gruntilda outside. While Bottles looks outside the window, Kazooie steals his poker chips. Later, when Gruntilda fired a magical spell at Banjo's House, everyone escaped except Bottles. Kazooie was inadvertently responsible for Bottles' death because when they alerted him about Gruntilda, he thought they were tricking him again.

During the adventure, Kazooie resumes her rivalry with Bottles via Jamjars. Kazooie often breaks the fourth wall with quotes such as, "We'll have this game finished in no time." Banjo and Kazooie gain the ability to separate once they learn the Split-Up technique. Kazooie has less health than Banjo when she is outside of his backpack. She can run faster, jump higher, and has the ability to hatch eggs. Kazooie's technique, the Wing Whack, allows her to hit foes with her wings. While Kazooie is moving or is in midair, she twirls with her wings spread out.

Banjo and Kazooie manage to defeat Gruntilda once more and spend the next eight years a lazy lifestyle. 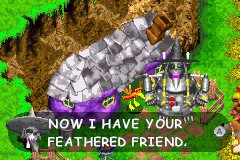 In Banjo-Kazooie: Grunty's Revenge, Mecha-Grunty kidnaps Kazooie and goes back in time, hoping to stop Banjo and Kazooie from ever meeting. During his adventure, Banjo finds Kazooie imprisoned behind bars in Breegull Beach. After battling Mecha-Grunty, Banjo frees Kazooie, and they reunite for the rest of their adventure. As a duo, Banjo and Kazooie managed to defeat Mecha-Grunty and restore the timeline.

At one point, it is revealed that Banjo and Kazooie met on Breegull Beach, where he found her inside a blue backpack.

In Banjo-Pilot, Kazooie is a playable character and is available from the start, having low top speed, average acceleration and high handling. Being a standalone racer, Kazooie is separate from Banjo for the whole game (the game's tagline even references Kazooie by saying, "Bear no longer needs a bird to fly!"). Kazooie is the boss of Honeycomb Cup, being fought at the end in the match "Kazooie Klash." During the battle, when Kazooie is flying in front, she drops behind Clockwork Kazooie Egg that act like Single Blue Ice Eggs. 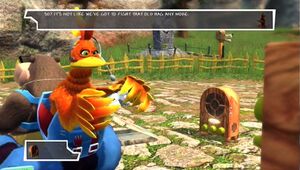 Kazooie playing Hero Klungo Sssavesss Teh World on her Xbox 360 during the introduction sequence of Banjo-Kazooie: Nuts & Bolts.

In Banjo-Kazooie: Nuts & Bolts, Kazooie, like Banjo, has become lazy and fat from years of inactivity. In the game's introduction, Kazooie is shown playing Xbox 360 with Banjo. When Gruntilda's head shows up and challenges the duo again, Kazooie prepares to fight alongside Banjo. Just before they can fight, an omnipotent entity named L.O.G. intervenes by pausing the game. He creates a vehicle-based journey for Banjo and Kazooie against Gruntilda.

The duo is then given their first vehicle and sent to Showdown Town, after which Kazooie is made the official keeper of the magic wrench that L.O.G. awards them to assist them in their journey. Kazooie can use it at any time to pick up various items, or to magically summon their vehicle if it is out of reach. At the end of the game, she defeats Gruntilda once again with the help of Banjo, and is made the co-owner of Spiral Mountain as a result.

Banjo and Kazooie are playable characters in Sonic & Sega All-Stars Racing with Banjo-Kazooie for the Xbox 360. In it, Kazooie heard rumors of a racing tournament starring a blue hedgehog. Kazooie helped Banjo fix up the Bolt Bucket and join in the race against Sonic and friends.

When achieving All-Star-Move, Kazooie swings the Magic Wrench in the air to summon the Jiggy Rain.

Kazooie is mentioned in the Diddy Kong Racing instruction booklet, before her first appearance in a video game. In Banjo's character description, the manual alludes to her future adventures in Banjo-Kazooie, suggesting that Diddy Kong Racing took place before the events of it.

Kazooie appeared in the N-Gang comic "N-Gang vs. Nintendo," where she played on the same soccer camp team with Banjo, Wario, Yoshi, Peach, Donkey Kong, and Lanky Kong. Mario refereed the match. Kazooie remained in Banjo's backpack for the entire match.

In Mario Artist: Paint Studio, two artworks of Banjo and Kazooie appear as premade images that can be generated and edited.

Kazooie, along with Banjo, make a cameo appearance in the selection menu for Conker's Bad Fur Day and Conker: Live & Reloaded. When selecting the chapters, Kazooie's head is used for an umbrella handle in the background.

In Grabbed by the Ghoulies, a monstrous version of Kazooie's head, labeled "Breegull," appears in the Trophy Room of Ghoulhaven Hall.

In Viva Piñata and Viva Piñata: Trouble in Paradise, there are several references to Kazooie. In the description of Bottles' Glasses, it is stated that Kazooie once sold it to Paper Pets, causing more to be made and the product to be highly sought after. Eventually, Bottles appeared and bought one himself. Piñatas can also wear "Kazooie Talons," and in both games plus Viva Piñata: Pocket Paradise a statue of Banjo and Kazooie holding a Jiggy called "Bird and Bear Statue" can be placed on the garden. In Viva Piñata: Trouble in Paradise specifically, Kazooie's head appears in a mountain on the background alongside Banjo's

In #IDARB, Banjo and Kazooie appear as playable characters. They are available in the "Rare Ltd." pack.

Kazooie has red-orange and yellow feathers, green eyes, long chicken like legs, and a sharp beak. There is a tuft of feathers on her head that sticks up.

Kazooie has a very different personality than that of Banjo's. She is rude to nearly everybody, and Banjo's close friends, Mumbo Jumbo and Bottles, do not like her that much. Banjo is the only character whom Kazooie is never rude to. Her rudeness often lands the two of them into trouble with other characters. She has respect for Banjo, because she stops insulting characters whenever Banjo tells her off. Although Kazooie has been willing to help other characters, she usually has selfish motives, such as expecting a reward from that character.

In the introduction for Banjo-Tooie, Kazooie is shown to cheat at games by tricking others. Later, when Bottles dies from Gruntilda's magical spell, she shows no remorse and makes a few wisecracks about it.

An idle animation in the Nintendo 64 games shows Kazooie poking her head out of Banjo's backpack and pecking at Banjo's head. He is sometimes shown to be annoyed by it and briefly wrings Kazooie by her neck.

As with Banjo, Kazooie learns most of her moves from either Bottles, Jamjars or Bozzeye, depending on the game. Kazooie has the ability to fly, run up steep slopes via Talon Trot, fire eggs from her beak and behind, peck at enemies and other targets, gain temporary invincibility via Wonderwing, and whack enemies with her wings via Wing Whack.

In Banjo-Tooie, Kazooie's standalone abilities are demonstrated while she and Banjo are apart, such as hatching an egg. If the duo bring a Mega Glowbo to Humba Wumba, Kazooie can transform into a dragon.

In Banjo-Kazooie: Nuts & Bolts, Banjo and Kazooie's abilities were taken by L.O.G., who instead puts them on a journey of them constructing and driving vehicles. Kazooie stays in Banjo's backpack for the whole adventure. She carries a magical wrench, Mumbo's Wrench, which she can smack Gruntbots with, carry objects, and turn pipes. She also carries it in Sonic & Sega All-Stars Racing with Banjo-Kazooie.

Banjo himself is a big, amiable Honey Bear, polite and well-mannered—in stark contrast to the Red-Crested Breegull Kazooie who lives in his backpack. Loud, sarcastic and rude, Kazooie's inability to keep her beak shut often lands the pair in trouble...

Together they race in the Bolt Bucket, a quirky vehicle custom-built by their longstanding ally (and a real wizard in the garage) Mumbo Jumbo."

Kazooie on other wikis: