Mrs. Bottles, also nicknamed Mrs. B, is the wife of Bottles, the mother of Goggles and Speccy, and the sister-in-law of Jamjars. She lives in an underground tunnel alongside her husband and children.

In Banjo-Tooie, when Banjo and Kazooie first meet Mrs. Bottles, she wonders why Bottles is late for dinner, unaware that he was killed by Gruntilda's spell. Banjo does not want to tell Mrs. Bottles about what happened to Bottles, and although Kazooie is fine with relaying this message, both of them decide to not tell her. Unaware of Bottles' death, Mrs. Bottles gets irritated and deliberately leaves his dinner overcoocked.

If Banjo and Kazooie return to Bottles' House before their final battle with Grunty, the door is locked. From inside the house, Mrs. Bottles tells the duo to first deal with Gruntilda, and then Klungo asks her for another scone.

One of the Tower of Tragedy Quiz questions asks what Mrs. Bottles' first name is. "Milky" and "Betty" are the two incorrect answers, and the correct answer is "It was never mentioned."

When Banjo and Kazooie complete their adventure and visit King Jingaling, he tells them that Mrs. Bottles, whom he calls "Mrs. B," is "a wizard cook," and that she makes delicious scones.

In Banjo-Pilot, although she is not physically seen herself, Mrs. Bottles is mentioned in the instruction booklet where it is asked "what will Mrs. Bottles think" about her husband participating in the races. 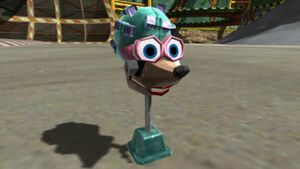 In Banjo-Kazooie: Nuts & Bolts, the Mole-On-A-Pole vehicle part features a mechanical recreation of Mrs. Bottles' head stuck to the end of a pole. It is unlocked through the Stop 'n' Swop feature, by obtaining the Cyan Mystery Egg in Banjo-Kazooie's Xbox Live Arcade release.

Mrs. Bottles is also mentioned by Bottles when Banjo and Kazooie ask him about her in Showdown Town. Bottles tells them two conflicting stories of Mrs. Bottles: in one of them, Mrs. Bottles is run over and killed by one of Gruntilda's vehicles, and in the other story, Mrs. Bottles continues living happily in Spiral Mountain. Although Bottles acknowledges the conflicting information, he does not bother telling the real story.

In the Jiggosseum's scoreboard, Mrs. Bottles is mentioned in the "Darts" category, where it is stated that "Mrs. 'Bullseye' Bottles is the new champion of the arrows, beating Gruntilda 'Double Chin' Winkybunion even though Mrs. B couldn't see the board." 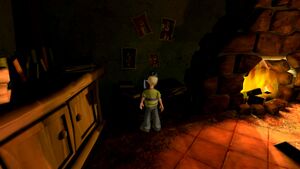 In Grabbed by the Ghoulies, boxes of "Mrs. Bottles Tea 50 Bags" can be found in the Housekeeping Store of Ghoulhaven Hall. A picture of her can also be seen in Dunfiddlin Cottage.

Mrs. Bottles is a relatively short Mole, wearing large, thick, Coke-bottle-framed pink glasses and a light blue dress with a yellow apron featuring illustrations of flowers with orange petals in it. She wears purple slippers and has several curlers in her hair, always being seen holding a red mug which reads "B-T," an acronym for Banjo-Tooie.