Mr. Patch is a character in the Banjo-Kazooie series. He is a large inflatable dinosaur who first appears in Banjo-Tooie, where he is found in Witchyworld's central attraction, the Big Top.

In Banjo-Tooie, Mr. Patch is encountered in Witchyworld, inside the Big Top, where he is subtitled "Strange Wobbly Inflatable Thing." He is only accessible after giving enough tickets to Conga. Mr. Patch is initially confused for a seat by Banjo and Kazooie, but is quickly revealed to be alive. While he was reluctant to fight the duo at the start, he eventually decides to do so after Kazooie continuously teases him, saying he was smaller than "that Klungo freak near the start." This causes him to inflate himself to much bigger proportions, starting the battle.

To defeat Mr. Patch, Banjo and Kazooie must burst all of his twelve patches with Grenade Eggs. After the duo's first attack hits him, a Flight Pad will appear, allowing them to continue the battle flying and using the Airborne Egg Aiming or the Beak Bomb move. A boxing glove will be summoned by Mr. Patch as a way to prevent the two to keep shooting him from the ground. Exploding beach balls that are nearly impossible to dodge on the ground will also be shot from his mouth. Mr. Patch gets smaller and faster after every hit taken, increasing the difficulty of the fight as aiming will become harder. Once Banjo and Kazooie have popped every patch, Mr. Patch completely deflates and flies away, and a Jiggy is left behind.

Mr. Patch is one of the characters to have a background in the "Tooie's Splendid" Xbox Live Dashboard theme. 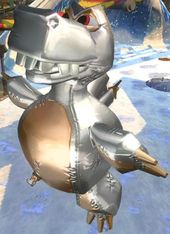 Metal Mr. Patch, as he appears in Banjoland.

In Banjo-Kazooie: Nuts & Bolts, Mr. Patch returns as boss, being featured in both Act 5 of Nutty Acres and Act 6 of Banjoland. He was apparently re-inflated by Gruntilda in an attempt to defeat Banjo and Kazooie.

Mr. Patch is first found in the mission "Old Dog, New Tricks" in the fifth Act of Nutty Acres. It starts with Humba Wumba telling the duo that the island was "all peaceful" that day, but she then suddenly "senses an approaching shadow" that turns out to be Mr. Patch, blocking the sunlight high above the farm. To prevent the plants withering, Banjo and Kazooie must quickly defeat the boss. While Mr. Patch himself is chained to the ground and can't damage the vehicle, Gruntbots on planes will appear to try preventing his loss. Much like in his previous appearance, his patches need to be shot in order to win, he gets smaller everytime a patch is popped and when defeated, he will deflate and fly off.

Mr. Patch is also a boss in the mission "Even Older Dog, Newer Tricks" in the sixth Act of Banjoland, but this time made of metal. In it, Captain Blubber warns the duo that an "Air-Filled Sea Beast(TM)" invaded the museum through through the Loggo exhibit and needs to be defeated. Due to Mr. Patch having a new metal body, the only way to defeat him is by pushing him into the Cactus o' Strength.

Additionally, pictures of Mr. Patch can be seen in the walls of Banjoland alongside other notable characters of the series.

Mr. Patch is a large inflatable dinosaur. He is crafted of shiny yellow and green fabric. His body has several holes that are covered up by colorful patches (his blatant weakness). Mr. Patch has bright red eyes, large ridges across his back, and several blunt. white teeth.

In Banjo-Kazooie: Nuts & Bolts, Mr. Patch has a slightly more menacing appearance, and his design was updated to match the game's angular art style. Minor details were added to Mr. Patch, such as yellow eyelids, claws on his hands and feet, and stitches around parts of his body. Many of Mr. Patch's patches have different placements, and his inflation valve was relocated to his belly button.