Klungo is a green, goblin-like character and one of the main characters in the Banjo-Kazooie series. He formerly served as the loyal assistant of Gruntilda and was a scientist who created various inventions to help with her evil schemes. Klungo first appears in Banjo-Kazooie and has since appeared in every game of series. Klungo is usually seen wearing a white lab coat. He speaks with incorrect grammar and, like Ssslumber, hisses every time he pronounces the letter "s."

In Banjo-Kazooie, Klungo has a minor role and only appears in a few cutscenes, helping Gruntilda with her Beauty Steal Machine. In a cutscene right before Banjo and Kazooie start their adventure, he tells Gruntilda that the machine has to power up but assures her that it will soon be ready. Klungo also appears in the Game Over sequence, in which he has an Igor-like role, as Gruntilda instructs him to pull the switch that transfers Tooty's beauty to her.

In the ending, after the final battle, Klungo is seen trying to push off a large boulder that fell on Gruntilda.

Klungo in the character parade, shown to have been beaten and battered by Gruntilda.

In Banjo-Tooie, Klungo's role was expanded from the first game. He is first shown in the introduction, still trying to lift a boulder off Gruntilda after two years. Just as Klungo decides to give up, Grunty's sisters, Mingella and Blobbelda, arrive and use their magic to lift the boulder. Klungo celebrates heartily and pats Grunty on the back, causing her loose eye to briefly pop out, which scares Klungo. After destroying Banjo's House, Grunty and her sisters leave in the Hag 1. Klungo tries to follow them, but Gruntilda instructs him to stay behind. Klungo awaits Banjo and Kazooie in a cave connecting Spiral Mountain to Jinjo Village. Klungo is fought on three separate occasions:

In every fight, Klungo tries to attack Banjo and Kazooie by throwing potions at them. Each time he loses a fight, Klungo feels ashamed and willingly returns to Grunty for beatings. Each time he is encountered, Klungo is shown to be increasingly injured and bruised. In each battle, Klungo uses a different potion to attack Banjo and Kazooie. In every battle, the duo can defeat Klungo by hitting him three times. There is no particular order for which potion is used during which battle:

After losing to Banjo and Kazooie a third time, Klungo complains that he is becoming increasingly less handsome after every battle, which makes Mrs. Klungo unhappy. Klungo abandons Gruntilda and decides to join Banjo's side as he walks out of Cauldron Keep, mumbling about how his future prospects with Grunty are not good. Klungo considers getting a job of making "ssstupid videogamesss." 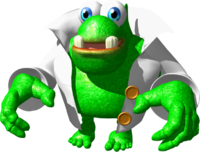 In the midquel Banjo-Kazooie: Grunty's Revenge, after two months of trying to free Grunty from under the boulder, Klungo designs Mecha-Grunty for Grunty to transfer her spirit into. Together, Mecha-Grunty and Klungo kidnap Kazooie and time travel to the past, hoping to prevent Banjo and Kazooie from ever meeting.

There are four boss battles in which Banjo and Kazooie fight Klungo, each set in a different location. Like Banjo-Tooie, Klungo relies on using potions in each battle, although there are only two variations. One of the potions generates a force field around Klungo, and is used by him in every battle. Starting with the second boss fight, Klungo also uses a potion which makes him invisible; this potion returns from Banjo-Tooie, retaining its side-effect of temporarily making Klungo visible while he uses it. In the third battle, besides retaining both of his potion abilities, Klungo also sends out red Germuloids. In the fourth battle, he sends out both red and green Spookos instead of Germuloids.

In the ending, after Grunty's soul returns to her normal body, she demands Klungo to send a note to her sisters to help lift the boulder off her, leading to the events of Banjo-Tooie.

In Banjo-Pilot, Klungo is a playable character, being unlocked by completing Skull Cup and giving 150 Cheato Pages to Cheato. He has low handling and acceleration but high top speed. Klungo is the boss of Skull Cup, being fought at the end in the match "Klungo Karnage." During the battle, when Klungo is flying in front, he throws behind potions that work like Single Blue Ice Eggs.

In Banjo-Kazooie: Nuts & Bolts, Klungo fulfills his dream of being a game designer. He runs his own arcade at the pier of Showdown Town. He made one video game, titled Hero Klungo Sssavesss Teh World, which Banjo and Kazooie can play to win Musical Notes.

In Super Smash Bros. Ultimate, Klungo is referenced in Gruntilda's spirit battle, where a giant green Dr. Mario takes his place. Dr. Mario, when defeated, returns two more times with slightly more HP each time, referencing Klungo's three fights in Banjo-Tooie. As part of the DLC, Klungo's boss theme from the same game is also available, and plays during the spirit battle.

In the Nintendo 64 games, Klungo has an oversized left eyeball and a regular-size eyeball, both of which are yellow. In Grunty's Revenge and Banjo-Pilot, both of his eyeballs are white and the same size. In Banjo-Kazooie: Nuts & Bolts, Klungo's left eye has been sewn on.

In Banjo-Tooie, during the party at Bottles' House, Klungo is wearing a purple lab coat and a party hat, and he has no bruises nor injuries.

Klungo is often shown to be slightly naive, yet also very intelligent when the situation demands it. For instance, he can construct complicated machinery and make potions and monsters to Gruntilda. His speech can lead one to assume that he is not very intelligent; he speaks mostly in sentence fragments and refers to himself in the third-person, often lisping when he says certain words that have an "s" in them. His grammar is also very poor; he often uses the singular form of words instead of the plural form when the plural form is needed. In Banjo-Tooie, Klungo is shown to be very obedient to Gruntilda, even asking her to punish him for his mistakes.