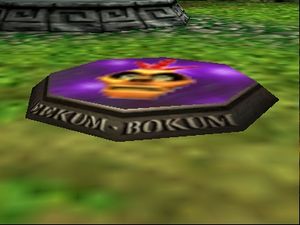 A Mumbo Pad in Mayahem Temple.

Not to be confused with Mumbo's Pad.
“This Mumbo Pad. Mumbo stand on it to perform great magic.”
—Mumbo Jumbo, Banjo-Tooie

Mumbo Pads are purple pads found throughout the worlds of Banjo-Tooie. They allow Mumbo Jumbo to, when in the possession of a Glowbo, cast spells to help Banjo and Kazooie, generally to obtain Jiggies. Most Mumbo Pads disappear after a single use, but certain ones can be used more than once, such as the Mumbo Pad in Mayahem Temple that is linked to the Golden Goliath.

The words "eekum-bokum," which is one of Mumbo Jumbo's catchphrases, is shown on the rims of a Mumbo Pad.