“I'm a Note, one of a hundred on each world. Collect us to open the Note Doors!”
—Musical Note, Banjo-Kazooie

Musical Notes, or simply Notes, are recurring collectibles in the Banjo-Kazooie series. Although they normally have different uses in each game, they are generally used as a type of currency.

Banjo obtaining some Musical Notes from a tree in Treasure Trove Cove.

Musical Notes first appear in Banjo-Kazooie, where they are used to open the Note Doors located throughout Gruntilda's Lair. Each level consists of 100 Musical Notes, and for each one that Banjo and Kazooie collect, it is added to that level's best Musical Note score.

Due to Gruntilda's magic, Musical Notes cannot be taken out of their level, so if Banjo and Kazooie lose a life or leave the level, the Musical Notes return back to their original locations (just like the Jinjos), even after they have obtained every Note. If Banjo and Kazooie have not obtained every Musical Note, they must recollect the ones they have previously obtained along with ones they have not yet obtained until they get all 100. In the Xbox Live Arcade port, the Notes are not reset when they exit a level or lose a life.

When Banjo and Kazooie approach a Note Door, their total number of obtained Musical Notes is displayed in a corner. They can only open the Note Door by having at least a minimum of the number shown on the Note Door.

There are a total of 900 Musical Notes, owing to the nine levels. In the Xbox Live Arcade port, if the player has obtained every Note, they unlock the "Music Maestro" achievement (worth 25G).

Like its predecessor, a total of 900 Musical Notes appear in Banjo-Tooie. They appear in Isle o' Hags and every level except for Cauldron Keep.

In Banjo-Kazooie: Grunty's Revenge, Musical Notes have a similar purpose as in Banjo-Tooie, as Banjo and Kazooie must collect Musical Notes to learn new abilities from Bozzeye. The Musical Notes are usually scattered across the world map individually, but may sometimes appear in a Note Nest. Every level still has 100 Musical Notes, including the hub world, Spiral Mountain. There are a total of 600 Musical Notes to collect. 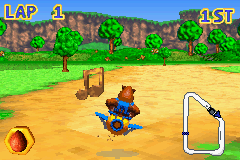 A Musical Note in the Spiral Mountain course of Banjo-Pilot

In Banjo-Pilot, there are four Musical Notes scattered in a set location for every course. If the player obtains each one, they receive more Cheato Pages after completing the race. By collecting a Musical Note, it briefly displays on screen with the other Musical Notes. When all four are collected, a small fanfare plays, and the four Notes individually slide off screen.

They replace the K-O-N-G Letters from the 2003 Diddy Kong Pilot. 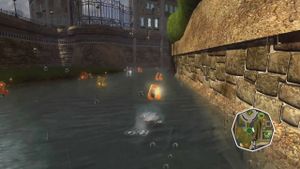 Banjo and Kazooie can use Musical Notes to buy vehicle blueprints, tips from Bottles, Jiggys from Jolly Dodger, upgrades for Boggy's Gym, and even to bribe Pikelet to keep the Showdown Town Police off his case. Banjo must not bribe the the police more than once else he cannot afford essential collectibles such as Jiggys.

1,900 of the Musical Notes can be obtained through traditional means; the rest are obtained through various methods, including Challenges, Klungo's Arcade, freeing Jinjos, capturing Minjos, and playing Jinjo Bingo. There are are a total of 5,230 Musical Notes. In the L.O.G.'s Lost Challenges DLC, there are 120 Notes, increasing the total to 5,350 Notes.

If the player has purchased every vehicle part and blueprint, they are left with a remainder of 9 Musical Notes. One of Bottles's offered hints is the Stop 'n' Swop Truth, at a price of 6,000 Musical Notes. However, it is impossible for Banjo and Kazooie to obtain this number of Musical Notes.