Banjo-Pilot is a racing game released for the Game Boy Advance featuring Banjo-Kazooie characters racing in planes. It was developed by Rare and published by THQ in 2005. It is the only spinoff title of the Banjo-Kazooie series and has no storyline nor relation to the main series. The race courses are rendered using Mode7 technology.

Banjo-Pilot was originally under development as Diddy Kong Pilot in 2001, which would be entirely redone into another title of the same name, distinguished as the 2003 build. Its earlier iteration was cancelled because of the Microsoft acquisition in 2002, and that Nintendo was concerned over its quality.[1] While Banjo-Pilot courses are rendered in Mode7, it had an earlier build where courses were rendered with the voxel engine. 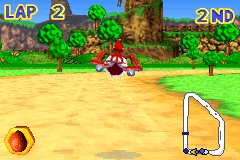 Kazooie racing in Spiral Mountain, the first course of the game.

The gameplay for Banjo-Pilot is very similar to the Mario Kart series. It involves the player racing in tracks against other racers, except they fly around in planes. Racers can collect an item from a Honeycomb, which are located throughout the tracks, usually in a pair. There are four collectible Musical Notes lying around a track, and collecting all four increases the number of Cheato Pages that the player obtains from completing the race.

Oddly, planes slow down when driving over rough ground. The player is also equipped with an indefinite supply of bullets, which slows another racer down for one second when it hits them. The player can hold down

to do a barrel roll, which is effective for taking sharp turns around corners. The player can avoid incoming items, such as Red Fire Eggs, by making a U-turn, which is done by pressing L and Down just when it is about to hit.

Two Multiplayer modes were also included on Banjo-Pilot, with GBA Link Cable support for up to four players: 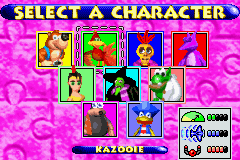 The character select menu, with all characters unlocked.

There are four playable characters from the start of the game.

There are five unlockable characters, each of whom can be unlocked from Cheato's menu after meeting a criteria.

Racers can receive an item by running into a Honeycomb.

It has been requested that one or more images be uploaded and added to this section. Remove this template once the image(s) has/have been uploaded and applied.
Specifics: Mumbo's Mountain and Rusty Bucket Bay

There are four battle stages, each of which are unlockable and only playable in multiplayer mode:

The music of Banjo-Pilot was composed by Robin Beanland and Jamie Hughes. Banjo-Pilot is the second Banjo-Kazooie game to not have Grant Kirkhope as a music composer.

Many characters from Rare's previous games make minor cameos in Banjo-Pilot. Characters like Tiptup, Gobi, and Master Jiggywiggy can be seen in various tracks. Sabreman, from Sabre Wulf, and Expresso, from Donkey Kong Country respectively appear in in Jolly Roger's Lagoon and Jinxy's Dunes. Other non-playable characters include Cheato, King Jingaling, and Roysten.