This is a history of the official Banjo-Kazooie series related websites created by Rare Ltd., Nintendo, and/or Microsoft.

This article requires cleanup in order to qualify for Jiggywikki's standards.
Reason: Wikia; needs resorting
You can discuss this issue on the talk page or edit this page to improve it. 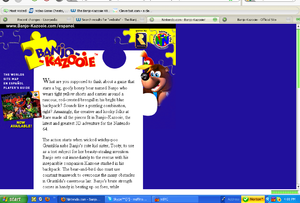 The original Banjo-Kazooie website was launched sometime in 1998, possibly before the release of the actual game, judging by the fact several of the images found on the site were from the beta version of the game. The site not only had an option to be displayed in Spanish but there was also much information about the game, with every world receiving its own page with information on how to get to that specific world, what moves are learned there, and several hints. At the bottom of each world page was a question about the certain world with three wrong answers (often humorous) and one right answer.

Upon getting the question right, a picture of Brentilda would be shown and a short notice would be displayed telling one that he or she got the answer right and claiming that the user had gotten a Jiggy. The notice had a hint or tip of information about the certain world. If the user got the question wrong, a picture of Gruntilda would be displayed and a notice would be shown telling the user he or she got the answer wrong. The amount of Jiggies the user earned did not really matter. The website can still be accesed using the internet archive here. 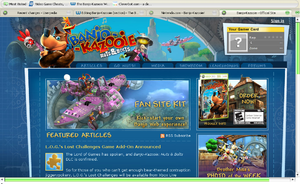 In early 2002, Nintendo shut down the site and made www.banjo-kazooie.com a redirect to the Nintendo website article about the game. Once Nintendo had sold Rare Ltd. and its characters to Microsoft around 2003 or 2004, the site was a redirect to the Rare Ltd. site. This continued for many years to come until 2008 when Banjo-Kazooie: Nuts & Bolts was released.

The new website contains a forum, rankings of the players in certain challenges in the game, downloads, a "Fan Site Kit" which includes artwork and sound files and the game manual itself. It also includes a gallery where users with Xbox Live can directly upload the screenshots they have taken in the game to the Banjo-Kazooie website. The site can be accessed here. 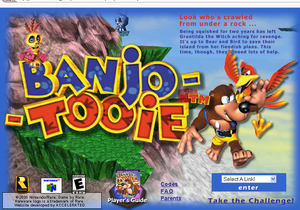 The Banjo-Tooie website was similar in many respects to the Banjo-Kazooie website. This website contained artwork of many objects and places in the game, biographies about the main characters, as well as information about the worlds, moves, items and other similar objects. Another feature was a quiz-like system, where the website asked questions on how to solve an actual Jiggy in the game and once the question was answered correctly, a movie was shown in which the user could see how to actually obtain the Jiggy in-game.

In early 2002, Nintendo decided to shut down the site and made www.banjo-tooie.com a redirect to the Nintendo website article about the game. Once Nintendo had sold Rare Ltd. and its characters to Microsoft, around late 2003 or early 2004, the site was made a redirect to the Rare Ltd. site and it still remains a redirect today. The website can still be accesed using the internet archive here but only the starting page can be opened.