Banjo-Tooie is the second game in the Banjo-Kazooie series and the direct sequel to Banjo-Kazooie. Like the previous game, Banjo-Tooie was developed by Rare, Ltd. and published by Nintendo. It was released for the Nintendo 64 in late 2000, or 2001 in Europe. It was ported to the Xbox Live Arcade in 2009. "Tooie" is a portmanteau of Kazooie and "two," owing to it being the second Banjo-Kazooie title.

Banjo-Tooie takes place after the events of Banjo-Kazooie: Grunty's Revenge, chronologically placing it as the third title of the series. Banjo-Tooie also takes place two years after the events of Banjo-Kazooie. In it, Mingella and Blobbelda free Gruntilda from the boulder she was trapped under, and they then attempt to help Grunty recover from her skeletal appearance with their Big-O-Blaster invention, which sucks the life from characters and objects in the Isle o' Hags. Banjo and Kazooie go on an adventure to stop Grunty and her sisters. Banjo-Tooie has a more cynical tone than its predecessor and introduced darker elements to the series, such Bottles's death.

Two years later after Gruntilda fell off her tower and was buried in Spiral Mountain, her loyal minion Klungo is still trying to push the boulder. Meanwhile, Banjo, Kazooie, Bottles and Mumbo Jumbo are playing poker inside Banjo's House. To cheat, Kazooie says that Gruntilda has returned and grabs Bottles' poker chips while he looks away. Suddenly, the four hear a noise outside, and the shaman goes to check what could've caused it. He ends up spotting Gruntilda's sisters, Mingella and Blobbelda, arriving in Spiral Mountain on their Hag 1 to free the witch. They use a spell to break the rock and Gruntilda comes out of her grave as a skeleton, mad about her current state. The sisters explain they have a plain to restore her body and go back to the drilling machine, heading to Cauldron Keep. Gruntilda, however, spots the shaman who runs away from her back to Banjo's home. He warns the three inside about the threat, but Bottles does not believe him and thinks its just a trick, like Kazooie did earlier. As he was telling the truth, Gruntilda casts a spell on the building and kills Bottles who was inside, leaving his burnt body outside with his soul leaving it. Banjo and Kazooie then set out on an adventure to avenge the mole and stop whatever plan the witches might have.

The duo go through the destroyed Spiral Mountain and enter the Digger Tunnel left by the Hag 1, encountering Klungo. They fight and the duo wins, reaching Jinjo Village. They meet its ruler, King Jingaling, who gives them the game's first Jiggy and talks about Jiggywiggy's Temple, where they will be able to open more worlds and reach Cauldron Keep. He then opens a tunnel in Bottles' House that leads to said place. The duo heads there, and King Jingaling's Throne Room is blasted by Mingella and Blobbelda's Big-O-Blaster, the life-sucking gun they will use to restore their sister's body. The Jinjo king becomes a zombie, and Toots a pile of ashes with eyes. Inside the mole's house, they meet his wife, Mrs. Bottles, who's not aware of his death and is still waiting for him to come back for dinner. Banjo is too afraid to tell her about what happened, and stops Kazooie when she attempts to. They also meet Bottles' children, Goggles and Speccy. Once they get through the Disciple of Jiggywiggy and finally meet Master Jiggywiggy himself, he tells them about the Crystal Jiggy and how it will allow them to reach Gruntilda, opening the first world, Mayahem Temple. There, they meet Bottles' drill sergeant brother Jamjars who teaches them new moves when they have enough Musical Notes. Throughout the worlds they also encounter Mumbo's Skull, where Mumbo can help them, and Wumba's Wigwam, where Mumbo's rival Humba Wumba lives. The shaman requests a Glowbo to help the duo with spells while the sha-woman needs it to transform them, essentially taking Mumbo's former role.

Once Banjo and Kazooie finally reach Cauldron Keep, they face off against Klungo one last time. After being defeated, he leaves and states he's off to make "ssstupid gamesss." Gruntilda then puts the duo in her own game show, the Tower of Tragedy Quiz, alongside her sisters Mingella and Blobbelda. They lose and get squished by 1 ton weights while Banjo escapes and runs upstairs to use the Big-O-Blaster and revive both Bottles and King Jingaling. The duo then goes to the top of the castle and fight Gruntilda in her Hag 1, answering a few more questions and exploding the drill. This leaves the witch as simply a disembodied skull, and duo leaves to celebrate at Bottles' House. The party was already over, however, so they call their friends to play kickball with the witch's remains. Gruntilda then claims she will get her revenge in "Banjo-Threeie" (a joke name based on "Snakes in Space," another joke sequel teased at the end of Snake Rattle 'n' Roll[1]), with Captain Blubber flying by on the Saucer of Peril. 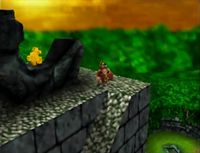 Gameplay screenshot of Banjo and Kazooie approaching a Jiggy.

The gameplay of Banjo-Tooie is fundamentally similar to its predecessor, Banjo-Kazooie: Banjo and Kazooie must travel across open worlds and collect items and complete tasks to unlock access for later areas; the areas are about twice as large as in Banjo-Kazooie. Banjo and Kazooie can use every move they have learned in Banjo-Kazooie (except for Claw Swipe, which was replaced with Peck), and learn some additional moves from Jamjars in every level. The new moves include Egg Aiming, the ability to use more Eggs, and using Split-Up Pads to play as Banjo and Kazooie individually; both characters can learn their own moves while separated.

Jiggys retain their role as the main collectibles. Instead of being used on Jigsaw Pictures, Jiggies are used to unlock worlds from Jiggywiggy's Temple; Banjo and Kazooie do not have to relinquish their Jiggies to enter a new world. Musical Notes appear in every level but only appear in nests. Every standard nest contains five Musical Notes, which have a 20-count variant named Treble Clef. Similarly, Eggs and Feathers are also grouped in nests.

Unlike Bottles, Banjo and Kazooie must collect a specified number of Musical Notes before Jamjars can teach the ability to them. Unlike the last game, the Musical Note count is preserved if Banjo and Kazooie were to enter then exit from a world. Like the previous game, five Jinjos appear in each level, including the Isle o' Hags hub world. There are nine Jinjo colors, and they are each grouped into families. Like Witch Switches from the first game, collecting every Jinjo in a world causes a Jiggy to appear outside the world's entrance.

Banjo-Tooie adopted some features from Donkey Kong 64, most notably the removal of the lives system: if Banjo and Kazooie lose all of their health, they restart from the last entrance. The Another similarity is how enemies respawn in the levels over time. Similarly, there is also a multiplayer mode where up to four players can compete in minigames.

Mumbo Jumbo is a newly playable character, whose main role is using magic spells to solve puzzles and Mumbo Pads to open newer areas. The player can switch control to Mumbo from Mumbo's Pad, if Banjo and Kazooie give a Glowbo to him in each world. Mumbo's new rival, Humba Wumba, handles the world transformations instead, and must also be provided with a Glowbo (the successor to Mumbo Tokens).

The worlds are physically connected to each other at multiple points, and are effectively extensions of the Isle o' Hags hub world. Chuffy can be used to transport minor characters between two worlds that each have a Train Station.

One of the minor differences is the HUD having a static headshot of Banjo and Kazooie, which would change emotion in the previous game (from happy to sad) based on the amount of health they had. Some slight visual improvements were also added, which includes animated water, better usage of lighting and shadowing, and some objects (such as Honeycombs) receiving new animations on the world map. 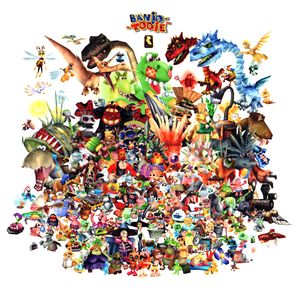 A collage of every character from Banjo-Tooie.

Like in Banjo-Kazooie, there are nine worlds, one hub world, and a starter world, equaling 11 in total.

Mumbo Jumbo can perform a certain spell in each world, provided that Banjo and Kazooie have given him a Glowbo.

Banjo-Tooie was both critically and commercially successful, recieving high scores and selling more than three million copies worldwide. It was praised for its gameplay and graphics, considered one of the best the Nintendo 64 could offer, but were criticized for the inconsistent frame rate at certain parts. Many reviewers often compared the game to Donkey Kong 64, saying Banjo-Tooie featured much less backtracking.