Sonic & Sega All-Stars Racing with Banjo-Kazooie is a 2010 kart racing video game, part of the Sega Superstars series, produced for the Xbox 360. It features various Sega characters, with Banjo and Kazooie as guest racers. 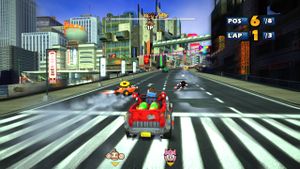 Gameplay while playing as Banjo and Kazooie.

Much like in other kart racing games, characters race through multiple tracks and collect special items to finish the final lap in first place. Executing successful drifts or performing tricks midair also earns the racer boosts. Each character has an All-Star Move unique to them, such as Banjo and Kazooie's Jiggy Rain move where they use Mumbo's Wrench to attack their opponents with falling Jiggies.

Vehicles in Sonic & Sega All-Stars Racing with Banjo-Kazooie are found in four categories: racing, off-road, bike and hovercraft. They perform differently depending on the terrain they are in, and work better in specific courses. For example, Banjo and Kazooie's car, the Bolt Bucket, is a racing-type vehicle and drives best on solid terrain like wood or concrete but drives poorly on soft surfaces like snow and mud.