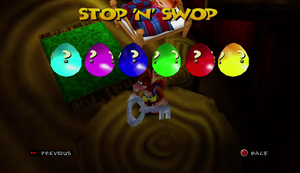 The Stop 'n' Swop menu with all seven items from the Xbox Live Arcade port of Banjo-Kazooie.

Stop 'n' Swop is an infamous scrapped feature from Banjo-Kazooie. The intention behind it was to find the hidden locations of six Mystery Eggs and the Ice Key, which the player could then transfer to Banjo-Tooie. 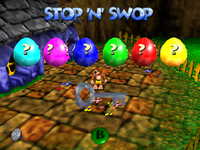 The Stop 'n' Swop menu in the original Banjo-Kazooie.

The only instance where Stop 'n' Swop is referenced during normal gameplay is in the 100% completion ending, after Banjo and Kazooie obtain all 100 Jiggies. The ending shows Mumbo Jumbo holding up a few photographs: two of them depict a Mystery Egg and the other one depicts the Ice Key.

It is possible for Banjo and Kazooie to unlock the location of a Stop 'n' Swop item and then obtain it from that location. To do so, Banjo must enter the Sandcastle of Treasure Trove Cove and hit the letter panels in a specific order to spell out a sentence.

There is a unique menu displaying the Stop 'n' Swop items that Banjo had obtained. It is unknown what accomplishment would have resulted from the items, as they are devoid of functionality or purpose in the game itself.

A few of the Stop 'n' Swop items were repurposed for Banjo-Tooie, the Ice Key, the pink, yellow, and light blue Mystery Eggs. Aside from the Yellow Mystery Egg, Banjo and Kazooie can obtain each item by defeating a Banjo-Kazooie Game Pak enemy. After obtaining an egg, Banjo and Kazooie must return to Heggy's Egg Shed for Heggy to hatch. However, Kazooie must hatch the Yellow Mystery Egg herself, as Heggy cannot reach it. The Ice Key was used for unlocking a Mega Glowbo that can transform Kazooie into a dragon.

The Stop 'n' Swop items have a different role in the Banjo-Tooie port on Xbox Live Arcade, as the three Mystery Eggs and Ice Key cannot be obtained unless the player has a save file for the Banjo-Kazooie port or Nuts & Bolts (including its demo).

A gold, silver and bronze Mystery Egg are featured in place of the preexisting eggs. They can still be hatched by Kazooie to achieve the same three unlockable, along with three additional features each: a gamer pic, an Xbox theme and the Stop 'n' Swop II submenu. The Ice Key retains its purpose for unlocking the Mega Glowbo.

Stop 'n' Swop is referenced by Cheato in Banjo-Pilot. Upon completing most of the game, Cheato sells an item called "STOP 'N' SWOP" for 999 Cheato Pages. This only results in Cheato saying: "So you want to know about Stop 'n' Swop, eh? I hope you're ready. Here goes...Why don't you stop annoying me and swop this game for a nice book or something?"

Additionally, for each Stop 'n' Swop item added to Banjo-Tooie on Xbox Live Arcade, the player can unlock up to seven additional vehicle blueprints in the L.O.G.'s Lost Challenges DLC for Nuts & Bolts.

Other Stop 'n' Swop references include an imprint of the Ice Key on top of Boggy's Gym and the large, fake Stop 'n' Swop eggs in Banjoland containing Gruntbots. Trophy Thomas also says that the duo cheated by stopping the game and swopping something after winning the "Cheatin' Witch" challenge in Act 4 of Nutty Acres, and during a trivia, Lord of Games asks a question regarding a failed connection between Banjo-Kazooie and Banjo-Tooie, of which the answer is "Stop 'n' Swop."

Bottles also offers a "Stop 'n' Swop Truth" in exchange for 6,000 Musical Notes. It is impossible to obtain this amount since only 5,230 Music Notes appear in the game (not including the additional 120 in L.O.G.'s Lost Challenges). An unused text string reveals that by purchasing this advice, Bottles would have told Banjo: "I could tell you, but then I'd have to kill you, and we couldn't show that in a game with this rating. Put it out of your mind and think happy thoughts! Thanks for the notes!"[1]

For a few years, the feature remained hidden in Banjo-Kazooie. There is evidence suggesting that the feature was never implemented entirely because of some hardware revisions done to the Nintendo 64 in 1999. Originally, the player had up to ten seconds to swap the cartridges, but the circuitry in later revisions dropped the limit to one second, theoretically making this impossible.[2]

In January 2001, shortly after the release of Banjo-Tooie, a fansite called Rare Witch Project discovered how to unlock the Stop 'n' Swop items without the use of a cheating device.[3] This information was publicized in the February 2001 issue of N64 Magazine and via a column in the April 2001 issue of Nintendo Power.

Seven years later, at E3 2008, it was announced that the Xbox Live Arcade port of Banjo-Kazooie would implement the Stop 'n' Swop feature as it was originally intended. It would be used in correspondence to unlocking content in Banjo-Kazooie: Nuts & Bolts.[4]

On January 27, 2009, Rare announced the Xbox Live Arcade port for Banjo-Tooie and that Stop 'n' Swop would also be implemented.[5]