“You've caught a Glowbo! They're supposed to have magical powers...”
—Jamjars, Banjo-Tooie

Glowbos are small, magical creatures that appear throughout the Banjo-Kazooie series. 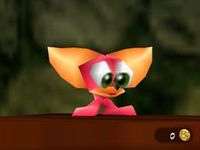 In Banjo-Tooie, Glowbos act as a source of magical energy that is used by both Humba Wumba and Mumbo Jumbo. As such, Glowbos are the replacement of Mumbo Tokens from Banjo-Kazooie. There are two Glowbos in every level, one for each shaman to use.

In each world, one of the Glowbos must be taken to Wumba's Wigwam. When Banjo enters inside with a Glowbo, he throws it into a small pool, and by entering it, Humba Wumba can transform Banjo into another creature or object for that world. Entering it again returns Banjo to normal. There is a Mega-Glowbo, and giving it to Humba Wumba allows Kazooie to become a dragon. The other Glowbo must be taken to Mumbo's Skull and be used as energy for Mumbo's wand, allowing him to use a spell somewhere in that world.

In Banjo-Pilot, Glowbos can be found on most tracks after enough Cheato Pages are given to Cheato. If the racer shoots at them, a boost appears. By flying through it, the next boost appears and so forth; up to four boosts can appear. There is a lesser common green variant, and firing at it creates a yellow boost, which the racer can fly through to automatically be taken almost an entire lap around the track.

In Banjo-Kazooie: Nuts & Bolts, Glowbos are present in two occasions. In Spiral Mountain, a Glowbo is seen inside the dumpster besides Banjo's House and in Act 3 of Nutty Acres, a Jinjo says he and his Glowbo pet were walking near the volcano when he "accidentally" kicked it into the water and asks Banjo to retrieve it. Unlike its two previous appearances, the Glowbos in this game do not move.