“Hey...It's me, Mr. Jiggy! Now go and find a picture with a piece missing.”
—Jiggy, Banjo-Kazooie

Jiggies, also known as Jigsaw Pieces, are collectibles in the Banjo-Kazooie series. They are golden jigsaw pieces that can open entrances to various worlds using their magic, being required to progress through most Banjo-Kazooie games. They are generally obtained by completing mini-games, defeating bosses, reaching the end of platforming segments or helping characters.

In Banjo-Kazooie, Jigsaw Pieces are used to complete Jigsaw Pictures and open different worlds. There are 100 Jiggies in the entire game, each world having 10 each (with the only exception being Spiral Mountain). Unlike in the subsequent games, used Jiggies will disappear from the duo's counter.

In Banjo-Tooie, Jiggies are used in Jiggywiggy's Temple to complete challenges and unlock worlds. There are 90 Jiggies in total, 10 less than the previous game.

In Banjo-Kazooie: Grunty's Revenge, Jiggies are once again used to open worlds with the help of Master Jiggywiggy in his temple, although no challenge is required to be beaten anymore. There are 60 Jiggies in total, 30 less than in the previous title.

In Banjo-Pilot, Jiggies are collected in the Jiggy Challenges, with 6 in each course, 24 in each Cup, 96 in each Grand Prix and 192 in total, being the biggest number of Jiggies in a Banjo-Kazooie game. A Jiggy also appears as the symbol of the Jiggy Cup.

In Banjo-Kazooie: Nuts & Bolts, Jiggies can be obtained in various ways such as throughout the Acts or buying them from Jolly Dodger. After collecting them, they must be withdrawn from a Jig-O-Vend and be inserted in the Jiggy Bank, located in the center of Showdown Town in order to open new Acts. If a cop sees the duo carrying Jiggies in their vehicle, it will assume they're smuggling and chase them. There is a total of 131 Jiggies that can be collected in the entire game.

In Super Smash Bros. Ultimate, a Jiggy appears as a spirit, and one of Banjo & Kazooie's victory poses has the duo collecting one and posing. A Jiggy also serves as the series symbol for the Banjo-Kazooie universe.

In the trailer that announced Banjo & Kazooie, a Jiggy was thrown through Donkey Kong's house, foreshadowing the duo's imminent appearance. 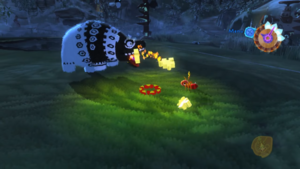 In Grabbed by the Ghoulies, Jiggies can be seen in several portraits throughout Ghoulhaven Hall.

In Viva Piñata, Fizzlybears use Jiggies in their attacks and the Bird and Bear Statue depicts Banjo holding a Jiggy. Additionally, Piñatas can wear an accessory named "Jiggy Earrings" which appears as part of the Banjo-Kazooie-themed Accessory Pack 6. The accessory returns in Viva Piñata: Trouble in Paradise.

In Killer Instinct, a Jiggy tattoo appears as part of the "Rarewear" costume for Rash.