“Look at Moggy on Mom's bed. I'm going to tell her, and he'll be in so much trouble...”
—Soggy, Banjo-Tooie

Soggy is one of the three children of Boggy and Mrs. Boggy. She has two brothers, Groggy and Moggy.

In Banjo-Kazooie, Soggy and her brothers are found in Freezeezy Peak, inside of Boggy's Igloo. When Banjo and Kazooie first enter the igloo, they are greeted by Moggy, Groggy, and Soggy, who are upset that their father, Boggy, did not get them Christmas presents. When Banjo and Kazooie give a present to each of the kids, they reward them with a Jiggy. Ever since the kids receive their presents, they can be seen joyfully bouncing around the igloo while Boggy sleeps in his chair.

In Banjo-Tooie, Soggy and her brothers are older than in the previous game. The three of them are first encountered at Witchyworld with their mother, Mrs. Boggy, but refuse to leave. Therefore, Mrs. Boggy asks for Banjo and Kazooie to help return them back to her. Soggy, like her brothers, are found in a random theme park attraction. To get Soggy to leave, Banjo and Kazooie must give her fries. Later, in Boggy's Igloo at Hailfire Peaks, Soggy watches Moggy jumping on the bed, hoping he will get in trouble for it. 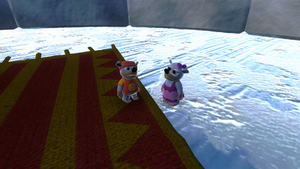 Soggy and Moggy as they appear in Banjo-Kazooie: Nuts & Bolts.

Soggy, Moggy, and Groggy were planned to appear in Banjo-Kazooie: Nuts & Bolts, but were cut from the game because of time constraints. Although they were cut, their head icons appeared in a promotional artwork for the game. The name of their canceled Jiggy game was "Don't Bring Your Kids to Work Day."[1]

Years later, Soggy and Moggy were discovered to be in the "Home Improvements: Igloo Edition" challenge of Banjoland Act 6. Soggy appears on top of Clanker, which is far away from where the challenge itself takes place.[2] 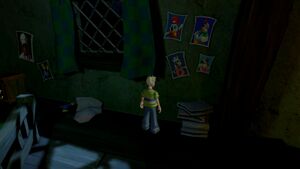 In Grabbed by the Ghoulies, a picture of Soggy can be seen in the Dunfiddlin Cottage room of Ghoulhaven Hall.