“Hello! I'm Bottles, remember? I used to be dead, but fortunately I got over that.”
—Bottles, Banjo-Kazooie: Nuts & Bolts

Bottles is a myopic[1] mole who wears large, thick, Coke-bottle-framed glasses. He is one of the main supporting characters of the Banjo-Kazooie series, and is one of Banjo and Kazooie's close friends. Bottles has a calm personality, and often serves as a tutor. He is the brother of Jamjars, husband of Mrs. Bottles, father of Goggles and Speccy and one of the descendants of Bozzeye. 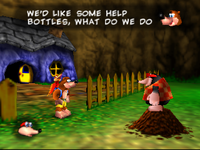 In Banjo-Kazooie, Bottles is first seen at the beginning of the game, where he is chatting with Tooty about what she was doing. Suddenly, Gruntilda appears flying in her broomstick and kidnaps girl, taking her to her lair. Bottles informs Banjo and Kazooie about what happened to her.

Bottles initially offers to train the duo by teaching them the basic moves as long as they locate his molehills in Spiral Mountain, but this can be refused and Bottles will simply give them all abilities learned in that world at once. He also appears in other worlds throughout the game, teaching other moves. Bottles is seen later in the game, during the celebration of Tooty's rescue eating a corn and falling off his chair after Tooty reminds them that Gruntilda still wasn't defeated yet. During the final battle against the witch, Bottles makes a Flight Pad appear to aid the duo in the fight, allowing them to fly. Lastly, he appears in the ending where he is eating a watermelon in the beach alongside other characters.

Bottles also hosts his moving picture game which can be accessed by looking at his picture inside Banjo's House. He gives a cheat code to input in the Sandcastle of Treasure Trove Cove for every level the duo completes.

Bottles turns into an angel upon dying in Banjo-Tooie

In the intro to Banjo-Tooie, Bottles is at Banjo's House, playing cards with Banjo, Kazooie, and Mumbo Jumbo. While they are playing, Kazooie points to something outside and steals Bottles' poker chips while he is not looking. Later, when Mumbo discovers that Grunty is about to destroy Banjo's House with a powerful spell, he urges everyone to evacuate. Bottles believes he is being lied to again, and remains inside the house when the spell obliterates it. In the morning, Bottles' charred body walks out of the house and collapses, at which point his angel leaves his body and floats above it, signifying his death.

Banjo and Kazooie can revisit any of Bottles' molehills around Spiral Mountain, where Bottles reminds them of basic gameplay mechanics and using moves that they have learned from the previous game. Besides this, Bottles' brother Jamjars, serves as his replacement, and teaches the new moves to Banjo and Kazooie. For most of the game, Bottles' corpses lies on the ground outside Banjo's House. If talked to, Bottles laments over his decomposing body and urges Banjo and Kazooie to hurry at getting it back.

Besides Jamjars, the game introduces the rest of Bottles' family and their house next to Jinjo Village. In the house, the duo meet Bottles' wife, Mrs. Bottles, his son Speccy, and his daughter Goggles. Banjo and Kazooie can optionally talk to them, but cannot bring themselves to tell them about Bottles' murder.

Near the end of the game, Banjo and Kazooie use the leftover energy from the Big-O-Blaster to revive Bottles. He runs back to his house, where he is greeted by his angry wife and forced to eat his burnt dinner for being so late. He tries to explain himself by telling her how he was killed and resurrected, but she doesn't believe him. King Jingaling and a reformed Klungo then come into the house, where they all decide to house a party in honor of Banjo and Kazooie's victory. In the ending, the duo, Jamjars, Mumbo Jumbo and Humba Wumba go to Bottles' house to join the party, only to be greeted by a sleeping Bottles, who tells them the party ended early because Klungo ate most of the food, to everyone's disappointment.

Bottles is featured in an infamous scrapped gameplay mode called Bottles' Revenge. In it, Bottles has a red, devilish appearance, and a second player could take control of certain enemies to antagonize player one. Although the mode became unused, a face icon for Bottles' devilish appearance is one of the icons that can appear on selectable answers in the Tower of Tragedy Quiz.

Bottles himself does not appear in-game in Banjo-Kazooie: Grunty's Revenge; however, Bozzeye, who is described as one of his ancestors, serves as one of the main characters, taking over Bottles' role of teaching moves to Banjo and Kazooie. Additionally, Bottles is briefly mentioned in the 100% ending, where Banjo says he'll "call for Bottles" for a game of cards.

In Banjo-Pilot, Bottles is an unlockable playable character. He has his own Grand Prix mode, Bottles GP, which is the first one available. In this mode, Bottles talks to the player briefly when they select a cup and after their racer completes it. Bottles is the boss of the Feather Cup, and is fought in a dogfight match at the end, "Bottles Bother." Here, when Bottles is flying in front of the player's racer, he drops behind stormy clouds, similar to how Single Blue Ice Eggs are used.

Bottles is unlocked by completing every Jiggy Challenge and then giving 500 Cheato Pages to Cheato. Bottles is the last character unlocked, and has the highest stats of any other character.

In Banjo-Kazooie: Nuts & Bolts, Bottles reappears with various roles throughout the Game Worlds. In Showdown Town, he runs the Tourist Information Kiosk. There, Banjo and Kazooie can buy information for Musical Notes or hear the free

In L.O.G.'s Lost Challenges, Bottles plays "The Handy Distraction." In Act 1, he hosts the challenge "Glossy Gaffes," where Banjo and Kazooie need to help him and others paint the Test-o-Track.

In Super Smash Bros. Ultimate, Bottles appears in the background of Spiral Mountain, waving. His idle animation looks similar to the one used by him in Banjo-Kazooie: Nuts & Bolts. He also appears as a Primary Advanced spirit, whose battle is against Donkey Kong with his second alternate costume. The battle conditions are that the enemy is invisible, favors side specials and is easily distracted by items.

Bottles appears in a Club Nintendo comic, "Super Mario in Aloha Hawaii." Here, he brings Mario along on a trip to Hawaii. While there, the two of them get into various shenanigans, including entering into a golf tournament. They accidentally wreck the course, and Bottles is last seen being chased by Mario into the horizon.

In Grabbed by the Ghoulies, pictures of Devil Bottles can be seen in various rooms of Ghoulhaven Hall. Boxes of "Bottles' Soapy Mole Bubble Bath" can also be found in the Bathroom of the mansion.

In Viva Piñata and Viva Piñata: Trouble in Paradise, players can purchase a pair of glasses named "Bottles' Glasses."