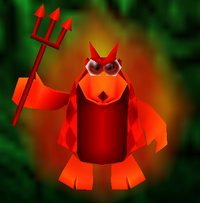 Bottles' Revenge is an unused game mode in Banjo-Tooie, which is only accessible via a cheating device. The mode was entirely removed from the Xbox Live Arcade port.

The mode entails Bottles' ghost becoming a devil, named Devil Bottles, whom the second player would control to possess enemies, whom themselves would go after Banjo and Kazooie. Sparkles appear above controllable enemies. If several enemies are in range, the second player can press

The reason why Bottles' Revenge was removed is because Rare found that the second player could exploit boss patterns that would have otherwise made it possible for Banjo and Kazooie to defeat the boss. The developers did not have enough time to fix the mode, so it went left unused. The idea was retooled as the "Counter Operative" mode in Perfect Dark.[1]

Although Devil Bottles was removed, his talk icon is in the Tower of Tragedy Quiz as one of the icons for selectable answers. The Xbox Live Arcade port updated the icon accordingly. Unlike the original icon, Devil Bottles' updated icon no longer shows him being cross-eyed. 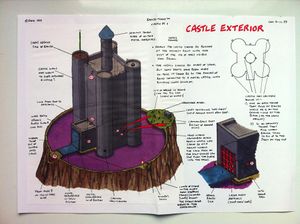 The exterior of the castle and general overview of the world.

The Castle world[2] was planned to be the final world in Banjo-Tooie, but was ultimately cut during development due to time constraints. Only a concept design and assets were produced, before the world was cut-down and re-purposed into Cauldron Keep.[3] Unlike Cauldron Keep, this earlier incarnation was to feature 10 Jiggies, Mumbo along with several Mumbo Pads, and a single Jamjars hatch. The addition of this world to the nine already in the game (including Isle o' Hags) would've lead to a total of 100 Jiggies, matching the total amount of Jiggies from its predecessor, Banjo-Kazooie.

The theme of the level would have been an old, and extremely large stone castle in the process of being converted into a high-tech metallic stronghold, with signs of construction strewn about the level. A graveyard would have been located at the back of the castle, with a crypt housing a character named 'Mrs. Ghost', and a haunted suit of armor. Cannons at the top of the castle would fire down upon Banjo and Kazooie. Gruntilda herself would be housed in the central tower of the castle, seemingly a new and modern addition to the castle that clashes with the crumbling stone architecture of the main keep.

Warp Pads throughout the world would initially be disabled. They would be covered with a translucent dome, which would retract with the press of a nearby switch. Once a generator in the castle's Teleport Power Room had been activated, indicator lights on the base of Warp Pads would change from red to green, indicating that they can be used.

Mumbo was to be heavily featured within the level, and would have been used to initially gain access to the castle, and activate the Warp Pads by powering a generator. A room containing a large electrified floor required Mumbo to disable another power generator to deactivate the floor. A seed could be planted on one of the castle's turrets, and grown by Mumbo's spell into a beanstalk leading to Cloud Cuckooland. Another turret contains a Raven's Egg, which Mumbo could hatch. Mumbo's Skull would have been located be to the right hand side of the castle as Banjo entered the level. Mumbo could enter the level via stepping stones before the drawbridge is lowered.

Some aspects of the original design are present in Cauldron Keep; a laser mesh portcullis, a purple acidic moat, and an additional Jiggy challenge requirement to access the final battle against Gruntilda.