The Wonderwing is a move that allows Banjo and Kazooie to gain temporary invincibility while they are using Golden Feathers. Every few seconds, a Golden Feather is used up. The move expires if the duo uses all of their Golden Feathers. 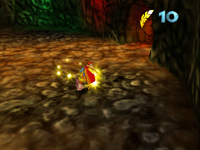 In Banjo-Kazooie, Bottles teaches Banjo and Kazooie how to use the Wonderwing in Clanker's Cavern, inside Clanker. It is performed by holding

, shielding the duo of all damage while active.

Wonderwing is an optional ability, and is not required to complete the game. It is possible to collect most items except for a Mumbo Token in autumn of Click Clock Wood found in a big Snarebear at the highest point of the level. Furthermore, Kazooie must know how to use Flight before she and Banjo can use Wonderwing, even though the two moves are unrelated.

In Banjo-Tooie, Banjo and Kazooie start the game already knowing how to use the Wonderwing. It is performed the same way as it did previously and can be remembered in Spiral Mountain by Bottles' spirit. Most enemies now flee from Banjo and Kazooie when the move is active, sometimes forcing the duo to chase them in order to defeat them.

In Banjo-Kazooie: Grunty's Revenge, the Wonderwing is taught to Banjo and Kazooie by Bozzeye in Spiller's Harbor for 350 Musical Notes. Unlike in previous games, the Wonderwing can only be performed by pressing

while standing on a Wonderwing Pad.

In Super Smash Bros. Ultimate, the Wonderwing appears as the duo's side special attack. It is now performed as a barge and cancels out most other attacks used against it. However, it may only be used up to five times per life, with its remaining uses represented by Golden Feather icons over the duo's heads when they use it. If they try to use it again, they will simply trip. It is unable to damage shielding characters, simply soaring past them, potentially allowing them to hit the duo from the back. The move also does not protect from grabs.