Heggy's Egg Shed is a location in the Banjo-Kazooie series. It is the home of Heggy, and Mystery Eggs can be hatched within it. 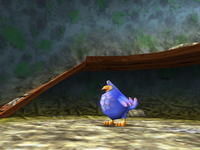 In Banjo-Tooie, Heggy's Egg Shed can be found in the Wooded Hollow area of the Isle O' Hags. When Banjo and Kazooie first enter without any Mystery Eggs, they're unable to do anything. However, as they collect the eggs, those can be given to Heggy who will hatch them for free, unlocking various awards.

The Bill Drill can be used on a spot of the shed to reveal Split-Up Pads. They can be used to Split-Up Kazooie from Banjo, allowing her to climb a slope and Hatch the egg there, as Heggy herself cannot do that due to the fact they're out of her reach.

In the Xbox Live Arcade release of Banjo-Tooie, Heggy can hatch six Mystery Eggs. They, however, must first be collected in the Xbox Live Arcade release of Banjo-Kazooie to be used here. While the awards from the original version can still be obtained, they aren't assigned to specific eggs and are instead unlocked based off on how many eggs have been hatched rather than which eggs are being hatched. Additionally, the Banjo-Kazooie Game Paks now give brand new eggs — Bronze Mystery Egg, Silver Mystery Egg and Gold Mystery Egg — as the old ones are acquired in different ways now.

In Viva Piñata and Viva Piñata: Trouble in Paradise, on the sign of Storkos' Egg Shed, Heggy's name can be seen crossed and Storkos' written under it, implying the building is Heggy's Egg Shed after being acquired by Storkos.