“Grunty's sisters you should not mock, now watch out magic blast this rock!”
—Mingella, Banjo-Tooie 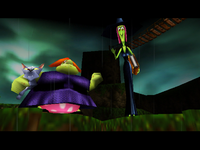 Mingella and Blobbelda watch Grunty come out of the ditch

In Banjo-Tooie, Mingella and Blobbelda first appear in the opening cutscene, where they arrive at Spiral Mountain. Mingella takes out her spellbook and manages to lift the boulder that Grunty has been stuck under, thus freeing her. Shortly after Grunty is freed, she and her sisters go into the Hag 1 and leave off to Cauldron Keep.

At the Tower of Tragedy Quiz show, Mingella and Blobbelda are contestants. Grunty calls Mingella her "gorgeous, slim sister." Both of her sisters up losing, and Grunty impulsively drops a 1-ton weight onto both of them.

In Banjo-Kazooie: Grunty's Revenge's ending, Blobbelda and Mingella are vaguely mentioned by Gruntilda, who orders Klungo to get her sisters to help her, thus starting the events of Banjo-Tooie.

In Banjo-Kazooie: Nuts & Bolts, Mingella is mentioned in the Lord of Games' quiz in Spiral Mountain. She is an incorrect answer for a question that asks "who was Banjo's adversary in Banjo-Tooie," with the correct answer being "Gruntilda."

Her and Blobbelda are also vaguely mentioned in Spiral Mountain by a information speaker in the description for "Grunty's Grave." It mentions that, after being buried under a rock in the events of Banjo-Kazooie, Gruntilda was "brought back by her sisters as an even less attractive skeleton."

Mingella is tall and thin. She wears a sleek, low cut navy blue dress and pointed witch's hat. She has a pink bob cut, a large, thin nose, and crooked yellow teeth.