From Jiggywikki, a Banjo-Kazooie wiki
(Redirected from Toxic Gas)
Jump to navigationJump to search

This article requires cleanup in order to qualify for Jiggywikki's standards.
Reason: Wikia; terminology needs research; maybe content can be merged here?
You can discuss this issue on the talk page or edit this page to improve it.

Hazards are natural or artificial objects that are not enemies, but are still capable of injuring Banjo and Kazooie.

Damaging terrain can take various forms, but all are hazardous to step into unless the Wading Boots are worn or the Wonderwing or Sack Pack is used. Most hazards cause damage every four or five seconds, thus giving Banjo or Mumbo time to get out before being hurt more than once. Banjo usually cannot move very fast in hazardous terrain, but it is possible to jump and Feathery Flap out of harm's way.

In most cases, when taking damage from these hazards for the very first time, a character's dialogue will appear on-screen to briefly explain the hazard.

The swampwaters in and around Bubblegloop Swamp are infested with many piranhas. Piranhas tend to bite things that enter their territory (except for crocodiles), so avoiding it is a good idea.

Freezeezy Peak's pools of water are far too cold to safely swim in without a thick layer of blubber. Some water is just deep enough to allow Banjo to paddle, which helps break a fall but obviates the use of the

Wonderwing. The water on Hailfire Peaks' Icy Side is just as cold but not as deep. The water seems to be home to some Snowys.

The liquefied sand in Gobi's Valley is superheated by the desert sun, burning anyone who falls into it. The sand at the bottom of the moat surrounding King Sandybutt's tomb can be rendered harmless by emptying the water from the nearby ziggurat into it. The sand eels, creatures that look like worms, are the one living thing that can survive in it.

The toxic waste pools in the basement of Grunty Industries, the pools of water on the Lava Side of Hailfire Peaks, and the water in the moat around Cauldron Keep will damage Banjo or Mumbo and fling them out onto a nearby surface. (One pool of water can be cooled by pushing George Ice Cube into it, rendering it harmless.)

The wellwater of Mad Monster Mansion has some sort of poisonous quality about it; what exactly is never explained. Banjo can safely enter as a pumpkin, however.

The path leading from the Inferno plaza to the Cave of Horrors is beset by serrated teeth, as is the gate leading to the Inferno itself. Banjo and/or Kazooie will take damage each time they come in contact with the teeth.

Large areas of Mayahem Temple and Terrydactyland are flooded with quicksand or swampland. The quicksand and swampland themselves are not dangerous, but the Dragundas living within are. Dragundas also appear in the poisoned water around Grunty Industries. The quicksand in Mayahem Temple does not damage Banjo constantly; it instead flings him out. While the Wonderwing won't stop you from getting flung out, it does absorb the damage given.

The Inferno in Witchyworld and the Fire Side of Hailfire Peaks is covered in molten rock. It is not to be touched.

Banjo and Kazooie can't breathe in anything but normal air, so entering another fluid or toxic gas can be dangerous.

Oxygen units are lost every eight seconds Banjo and/or Kazooie remain underwater or in toxic gas, or more rapidly under certain circumstances.

In Clanker's Cavern, many tasks have to be done underwater. However, Gloop can be found swimming around the anvil holding Clanker, emitting bubbles that restore two units of oxygen.

In Banjo-Tooie, freeing Roysten from the boulder and returning him to the Spiral Mountain moat will double Banjo and Kazooie's oxygen supply. In Jolly Roger's Lagoon, using Mumbo's Sunlight spell will oxygenate the water, negating the need to return to the surface for air.

Rusty Bucket Bay's reservoir is full of oil pollution. Simply swimming on the surface of the berth water uses up air, and diving underneath uses up air twice as fast. The water in Clock Clock Wood's winter has the same properties. 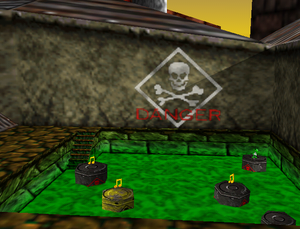 A large green pool in the corner of Rusty Bucket Bay contains this dangerous material, which is so toxic that it attacks both Banjo's air meter and health bar.

While Banjo and Kazooie are not physically limited in any way by toxic gas, they have to leave the area before their air meter depletes. If such happens, then health is constantly lost until fresh air can be taken in. Toxic gases of various kinds appear in Glitter Gulch Mine, Grunty Industries, Hailfire Peaks, Cloud Cuckooland, and the Hag 1 battle. While most toxic gases cause normal air loss, the gas in the Quality Control Room and sewers (if the Clinkers are not all removed) in Grunty Industries is so dangerous that air is lost two or three times a second.

If the bear or bird get violently forced between two solid objects, their health plummets to one or two honeycombs. A second hit finishes the job. The Wonderwing can protect against most crushers.

Found in Glitter Gulch Mine, these relatively weak crushers only deal one unit of damage. They must be shut down so the Jiggy Boulder can be mulched up.

The Triassic Steamroller, Stomponadon is found in the Stomping Plains of Terrydactyland. Being stomped with at least two units of health reduces your health to one unit, whilst being stomped with one unit of health results in death. Kazooie can move from footprint to footprint without being crushed, but Banjo has to recover health each time he reaches a footprint. Banjo and Kazooie together can use the Wonderwing.

While the Trash Compactor on Floor 1 of Grunty Industries is much the same as Stomponadon, the Wall Crushers can't be bypassed (even with the Wonderwing) unless Mumbo gives them an EMP, allowing Banjo and Kazooie to pass.

Banjo's leg bones can't take the stress of impact from too high up, so leaping off a cliff will likely lead to pain. Using the Feathery Flap can help prevent this, but not for very high plummets. Kazooie alone can Feathery Flap indefinitely to avoid this problem, but is still vulerable to fall damage. The FALLPROOF cheat in Banjo-Tooie deactivates fall damage, but doesn't prevent fall helplessness (the inability of action during a long fall). Falling into a liquid deep enough to swim in does no damage.

Just to note, the longest fall in Banjo-Kazooie takes place in the Engine Room (which has no floor, see below), while the biggest plummet in Banjo-Tooie is the Elevator Shaft in Grunty Industries. Sometimes if you fall real high in Banjo-Kazooie, it can cause an instant-kill.

While burning stuff can certainly be useful, it's generally a bad idea to touch the flames. Ice Eggs can put out some fires.

Flying like a missile can have its benefits, but if Kazooie misses and rams into something indestructable, there could be a medical problem—especially if the momentum of a ground impact leads to sliding off a cliff.

Grenade Eggs and Clockwork Kazooie Eggs are very useful, but their detonation can harm the shooter if used at too close a range. (Proximity Eggs also have this property.)

A certain Jinjo in Hailfire Peaks is trapped by this impassable wall of scorching liquid. The Wonderwing is the only way to get through; although it is difficult yet possible to make it through with the Honeyking cheat.

Cauldron Keep and the Area 51 section of Witchyworld are protected by a series of electrical gates that not only prevent entry, but injure would-be tresspassers.

The stoves at The Galley are very hot. Any sort of contact will give Banjo a third degree burn.

If Banjo and Kazooie cannot find their way out of the maze in King Sandybutt's Tomb before time runs out, the spiked ceiling drops in on them.

Rusty Bucket Bay, the tower, the Isle O' Hags, Glitter Gulch Mine, Witchyworld, Terrydactyland, Hailfire Peaks, Cloud Cuckooland and Cauldron Keep all have edges without ground below them. Falling off a cliff in such a case leaves it all to gravity. A similar case is in two locations in Grunty's Lair (the Gobi's Valley puzzle room with the entrance to Mad Monster Mansion, and Grunty's Furnace Fun), where falling off (or getting knocked off) the pathway results in a lava bath. (Note: In Banjo-Kazooie, all bottomless falls incorporate the "fell into lava" sound effect.)