“When you take a trip to Stomponadon's ground, she's not afraid to put her foot down!”
—Gruntilda, Banjo-Tooie

Stomponadon is a giant dinosaur who lives in the Stomping Plains of Terrydactyland. She is the largest character of the Banjo-Kazooie series, and only her foot is ever shown, even in the character parade. Judging from her foot, Stomponadon appears to be based on members of the Theropoda suborder of dinosaurs, such as a Tyrannosaurus Rex. The footsteps in the Stomping Plains (presumed to be from Stomponadon) are those of a sauropod, such as a Diplodocus.

In Banjo-Tooie, Stomponadon appears in the Stomping Plains of Terrydactyland, where she is subtitled "Triassic Steamroller." She constantly tries to stomp on Banjo or Kazooie while they try to cross the plains, and cannot be attacked or defeated. If she stomps on Banjo or Kazooie, they get crushed and instantly lose all of their health except for one honeycomb. They stay flattened for several seconds before returning to normal size.

There are large footprints in the ground that protect Banjo and Kazooie from Stomponadon. The duo can safely move between the footprints by either running with Talon Trot or using Wonderwing for invincibility. If Banjo is split apart from Kazooie, he cannot get across safely without taking damage; this is because he cannot quickly move between the footprints without Kazooie's help. The Snooze Pack or either of the three cheats, HONEYBACK, HONEYKING, and SUPERBANJO, are the only way Banjo can move across safely. 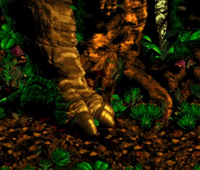 A similar dinosaur is featured in the cancelled Dream: Land of Giants.