“Please beat Grunty this time, I don't want to do her washing anymore...”
—Dingpot, Banjo-Kazooie

Dingpot is a Magic Cauldron owned by Gruntilda, who often mistreats him. He is a recurring character in the Banjo-Kazooie series, first appearing in Banjo-Kazooie. Unlike other Magic Cauldrons, Dingpot is shown with a constant frown, and has one gold tooth sticking out. His eye color is green.

Before the events of the first game, Dingpot was already treated badly by Gruntilda. She often vomited in him, used him as a toilet, got dandruff on him when leaning, used him as a garbage can for moldy vegetables and potato peelings, used him as a stove and used him to wash her clothes. At one point, he had a saucepan girlfriend, but her handle was broken by Gruntilda. 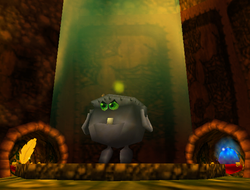 In Banjo-Kazooie, Dingpot appears in the opening cutscene, where Gruntilda asks him who is the "nicest looking wench." She expects it to be herself, but Dingpot instead tells her that it is Banjo's little sister, Tooty. This makes Grunty angry, so she kidnaps Tooty and tries to steal her beauty, causing Banjo and Kazooie to go on an adventure to rescue her.

Dingpot is not seen again until when the duo reaches the top of Gruntilda's Lair, where he resides. Kazooie comments on how stinky Dingpot is, leading him to explain the hardship that Grunty has put him through. Dingpot decides to help the duo by transporting both to the tower by jumping inside of him. He does so because he wanted them to defeat Gruntilda, which would free him from the cruel treatment she gave him.

In Banjo-Tooie, Dingpot is found in Cauldron Keep. When Banjo and Kazooie meet Dingpot again, Kazooie again mentions Dingpot's bad smell and remembers when they last met. Dingpot offers the duo a "Dingy bonus" that refills their Eggs and Feathers. The bonus is acquired by jumping inside of him, like in the previous game. Kazooie references this, saying she does not want to jump inside of him because she "just got [her] feathers clean from last time."

In Banjo-Pilot, Dingpot appears as the symbol of Cauldron Cup from Grunty GP. He retains his design from the previous games, but with the eyes, tooth and wooden ladle gray.

“That smell doesn't mean I'm starving to worry, it's what happens after a Dingpot curry!”
—Gruntilda, Banjo-Kazooie: Nuts & Bolts

In Banjo-Kazooie: Nuts & Bolts, Dingpot appears being used by Gruntilda as the seat of her many vehicles. His eyes and eyebrows move when the vehicle is repeatedly hit. Dingpot sometimes opens his mouth, but does not talk. He is later mentioned in two instances: by Gruntilda in Showdown Town and by Klungo in Act 5 of Nutty Acres, where he says that Dingpot "usssed to do cooking" when he was still Gruntilda's minion.