The Mighty Jinjonator is a massive, light blue Jinjo and a character in the Banjo-Kazooie series. He was inspired by the Terminator from the eponymous film franchise.[1] 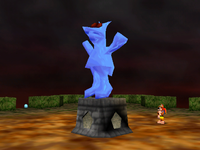 The Mighty Jinjonator after being activated in Banjo-Kazooie.

In Banjo-Kazooie, during the final battle against Gruntilda, when she is close to being defeated, the witch will summon a magic barrier to protect herself from Banjo and Kazooie's attacks. During this, four stone statues of Jinjos with a hole in their pedestals appear in each corner of the tower. Once three Eggs have been fired in the holes, the statues will break, revealing purple, yellow, green and orange Jinjos inside each of them.

As the Jinjos break free, they attack Gruntilda by flying into her, in order to help Banjo and Kazooie. As all four Jinjos attack, the Mighty Jinjonator appears (inside a stone statue, like the other Jinjos) and asks for the duo to activate him. Rather than one hole, the base of the Mighty Jinjonator has four them, each needing six Eggs to be fired in them in order to activate him. This can be difficult, as Gruntilda will fire spells to try defeating Banjo and Kaooie while they do that.

Once he is finally activated, the Mighty Jinjonator emerges from his statue as the four colored Jinjos fly to merge with him. He then proceeds to start flying in circles before striking the witch with multiple times. As Gruntilda continues to be hit, she claims to be "firmly rooted in [her] stance." Despite that, the Mighty Jinjonator's final blow destroys her force field and sends her falling out of the Tower into the ground, where she is buried in the ground by a boulder. Before falling, she casts one final spell that, fortunately, misses Banjo.

In Banjo-Kazooie: Nuts & Bolts, the Mighty Jinjonator is briefly seen in the introduction of the game, where the story of Banjo-Kazooie and Banjo-Tooie is being retold, throwing Gruntilda out of her tower.

Later, during Act 2 of Banjoland, the Jinjonator is mentioned by an orange Jinjo during a Jinjo Hurling challenge, who claims to have "been reading the old stories about the fearless Jinjonator," and wants to be hurled to become "a fearless Jinjo too."

Finally, during the Lord of Games' quiz in Spiral Mountain, he asks in one of the questions "who knocked Grunty off her tower at the end of Banjo-Kazooie," with the right answer being "The Jinjonator" and the wrong ones being "Her grandfather," "Mumbo Jumbo" and "Klungo."

The Mighty Jinjonator serves as the Final Smash of Banjo and Kazooie in Super Smash Bros. Ultimate. He appears with four Jinjos, each one being colored the same as the ones from Banjo-Kazooie, and repeatedly strikes opponents to launch them away. He also appears as a neutral, ace spirit whose ability is to make the player giant, being obtained by enhancing the Jinjos spirit.