“My title is the Lord of Games, but you has-beens call me L.O.G. I am the grand creator of all videogames!”
—Lord of Games, Banjo-Kazooie: Nuts & Bolts

The Lord of Games, often abbreviated to L.O.G., is one of the main characters in Banjo-Kazooie: Nuts & Bolts. He is an omnipotent deity and a personification for video games overall. L.O.G. claims to have been involved with the creation of every video game, making them in his game factory.

L.O.G. has a notable role in the main story, as he organizes a contest between Banjo and Kazooie against Gruntilda for the Spiral Mountain deed. The resulting winner would earn the deed, and the loser must work in his video game factory for an eternity. L.O.G. created every world in the game, all of which are artificial environments.

“This L.O.G. guy happens to be the man, the big cheese, the supreme being, the creator. Stay on his good side!”
—Bottles, Banjo-Kazooie: Nuts & Bolts

L.O.G. claims to have created every game ever, and due to his position, is occasionally a prone to bragging. He also mentions in passing that he has a wife, the Lady of Games, who was the first to create games that had "kittens, ponies and ninjas being blown up with rocket launchers." 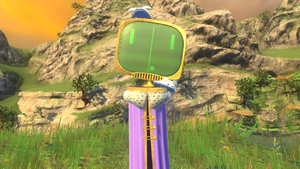 In Banjo-Kazooie: Nuts & Bolts, L.O.G. first makes his appearance at Spiral Mountain, where he briefly "pauses" the game just as Banjo and Kazooie are about to fight Gruntilda. The word 'Pause' appears on-screen as L.O.G. materializes. He turns then into a frog and a pumpkin and sends them on a quest to collect objects scattered around Spiral Mountain. After deciding the challenge he concocted was pointless, L.O.G. decides on a new one and sends the three to Showdown Town in newly-created vehicles.

Once there, he explains that he can offer the deed to Spiral Mountain. The rules of his contest are that if Banjo and Kazooie can collect enough Jiggies to return to Spiral Mountain, they win, and Grunty wins if she can prevent them from doing so. To make the competition fair, he gives Grunty a new body and a purple cat, Piddles, as her new sidekick. L.O.G. restores Banjo and Kazooie's physical fitness and gives them a magic wrench. He does not give the duo back their moves learned in the two previous games, stating that they will not need them. L.O.G. then creates five large worlds for them to compete in and leaves. From that point on, Banjo and Kazooie can visit L.O.G. in front of his game factory. Although L.O.G. tries to remain neutral throughout the competition, he later admits that he does not want Grunty to win.

L.O.G.'s makes a final appearance at Spiral Mountain, where he awards six Jiggies to Banjo and Kazooie if they complete his Six of the Best task, which is interlaced with a trivia quiz. When the duo win the final challenge against Grunty, L.O.G. pauses the game before they can finish her off. He instantly teleports Grunty and Piddles to his video game factory and gives the Spiral Mountain deed to Banjo and Kazooie, and their moves from the previous two games.

In Killer Instinct, L.O.G.'s head appears as a backpack in the "Rarewear" costume for Rash.

L.O.G. is a tall character whose appearance consists of a floating, golden cathode ray tube monitor and a long, mauve robe. The screen that makes up his "face" is green, and it's a screenshot of "Generic Paddle Tennis Game 5"[1] (a parody of Pong, one of the first video games ever created), complete with two paddles, ball, and a screen divider. The two paddles appear to represent his eyes, and his mouth could either be represented by the ball on-screen or the speaker at the bottom of the monitor. There are two literal, living computer mice crawling around him, and their tail represents a USB plug, and at one point L.O.G. says that nobody except his mice understand him.

“It would be a shame to let Gruntilda win and turn your homeland into a grotty, ugly suburb. But I must remain impartial...”
—Lord of Games, Banjo-Kazooie: Nuts & Bolts

L.O.G. has a wise yet domineering personality. He is often shown to be fair, such as when he gave Grunty a new body so that she could have an equal chance of the competition for the Spiral Mountain deed.

L.O.G. is knowledgeable of the first two games, Banjo-Kazooie and Banjo-Tooie. The Banjoland world has several artifacts originating from these two games. He references other characters and locations in his quiz during the final challenge. L.O.G. could also represent the game's developers, Rare Ltd., as the U.F.O. exhibit directly states that he worked hard to get Banjo-Tooie released in a timely manner.

L.O.G. is an omnipotent character. Some of his abilities shown are teleportation, the ability to "pause" the game (without being affected), and the ability to transform characters into different forms. He can create entire areas, namely the worlds accessed from Showdown Town. In one part, he threatens to reduce Banjo and Kazooie to basic pixels.