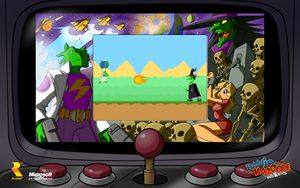 “Have you played Klungo's arcade game yet? Sheesh, that has to be the worst game in "teh" world.”
—Supporting cast, Banjo-Kazooie: Nuts & Bolts

Hero Klungo Sssavesss Teh World is an 8-bit mini-game in Banjo-Kazooie: Nuts & Bolts. It was developed entirely by Klungo, and can be played inside his arcade in Showdown Town.

In the game, Banjo controls Klungo as he carries the world. As he automatically runs without any inputs, the only button used is

, which causes Klungo to jump. During the first four levels, many holes, stacked enemies and other obstacles need to be avoided in order to progress, with the fifth and final level being a fight against Gruntilda. The levels become available as certain ammounts of Jiggies are banked, but the previous level still needs to be beaten in order for Banjo to advance onto the next one. When a level is beaten for the first time, Klungo rewards Banjo with Musical Notes.

Occasionally, the game crashes and a fake error message pops up, causing Klungo to have to reset the game and complain that he "sssure he have that one fixed."

Like many other arcade games, a drawn border around the screen itself showing Klungo, Gruntilda and other characters can be seen.