“Welcome all, Grunty's the name, Banjo's here to play my game! My lair is done and here he stands, through all my tricks and traps and lands! This final test will see me win, when Banjo fails then I'll be thin! The prizes on this stand bring joy, from Tooty down to cuddly toy! My little quiz will make you sweat, and Tooty you shall never get! 'Cuz somewhere soon along the way, your lack of skill will make my day... 'Cuz in the fiery pit you'll go, and I will win the prize on show! So step on over to the square, press

to try it if you dare!”
—Gruntilda, Banjo-Kazooie

Grunty's Furnace Fun is a minigame in Banjo-Kazooie, taking the form of a quiz show hosted by Gruntilda.

The entrance to Grunty's Furnace Fun is hidden behind a Note Door that requires 765 Notes to open. Behind the door is a small corridor leading to a room with a warp pad showing Tooty's face on it; stepping on the pad warps Banjo and Kazooie to a fiery cavern, where the minigame starts.

Grunty's Furnace Fun takes the form of a quiz show, which Grunty forces the duo to pass through before they choose a prize: a Gruntilda Doll for third place, a Washing Machine for second place, or Tooty as the "Star Prize."

The quiz is laid out as a tiled board, with each panel representing a different question or challenge. Answering a question correctly or completing a challenge allows Banjo and Kazooie to progress to the next tile. If they fail, Banjo and Kazooie lose one Honeycomb and will not proceed to the next square. If the player loses a life, they must restart the quiz from the beginning. Invisible walls prevent the duo from falling into the lava by accident, although they can still fall off from other parts of the cavern. Most abilities aside from the basic jump are disabled as long as the player remains on the board, even after the minigame is cleared.

When the quiz is completed, Grunty expresses disbelief and anger at the duo's victory, and runs off to the top of the tower. Banjo and Kazooie save Tooty, and as the three of them decide to leave Grunty's lair, the credits plays. When the staff roll ends, Banjo and his friends are seen enjoying a celebratory barbecue, until Tooty reminds them that Grunty escaped and still needs to be defeated, to the others' comical shock. Banjo and Kazooie run back to Grunty's lair, and the game resumes from the end of Grunty's Furnace Fun.

After the quiz is completed, it can no longer be played again on the same save file. A yellow Magic Cauldron behind the warp pad at the start of the minigame can take Banjo to the upper levels of the lair after the other yellow cauldron is activated. 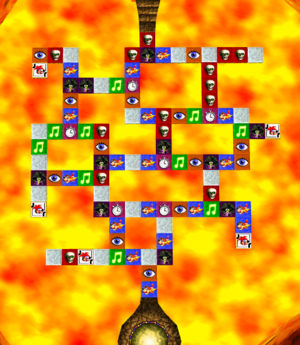 The entire layout of the board

There are also various blank panels around the board which contain honeycombs or extra lives.