Lava is a hazard present throughout the series. 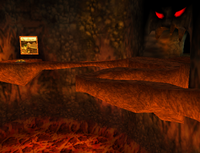 In Gruntilda's Lair, the room containing the Gobi's Valley jigsaw puzzle is a narrow walkway suspended over a pool of lava. Falling into the lava is instant death.

Lava also appears the Furnace Fun quiz game. If Banjo fails a question on while a Death Square, he instantly gets thrown into the lava below. 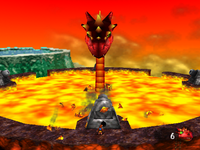 Lava first appears in Glitter Gulch Mine in the boss fight against Old King Coal. Initially, the lava on the floor is cool and safe to walk on, but after Coal takes enough damage for his left arm to break off, he turns up the heat in the boiler room, making the lava deadly for the duo, who must continue the fight while standing on the metal platforms; if they touch the lava, they take damage, knocking them up into the air.

Lava also appears in The Inferno in Witchyworld. It does not harm Van Banjo.

Lava prominently appears in the fire side of Hailfire Peaks, with fireballs occasionally jumping out. It is also featured in the boss fight against Chilli Billi.

Lava appears in the Grunty Industries sub-area of Freezing Furnace.

Lava is a hazard in the track Steamy Vents. It will occasionally pop, and racers must be careful to not fly too close to the lava. A large winged dragon who appears unique from Chilli Billi sits in the lava, appearing as a background element.