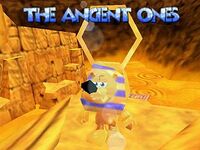 An Ancient One in the ending

The Ancient Ones are a group of four golden, sphinx-like statues that appear in Gobi's Valley of Banjo-Kazooie. They have blue eyes, a large ring on their head, a face that resembles Banjo's, and a gold-striped design on their face.