This article requires cleanup in order to qualify for Jiggywikki's standards.
Reason: Wikia import (except for opening paragraphs and trivia)
You can discuss this issue on the talk page or edit this page to improve it.

Click Clock Wood is the ninth world of Banjo-Kazooie. It is a forest revolving around the Click Clock Wood Tree in the center of the level. The world's central mechanic is its four different seasons, which alter part of the layout, characters and collectibles.

To enter Click Clock Wood, Banjo and Kazooie must have 69 Jiggies, 15 of which are needed for the level's own Jigsaw Picture. While the puzzle can be found very early in the game, in the same room that Treasure Trove Cove is entered from, there's initially no Jiggy Pad for Banjo and Kazooie to use, barring use of one of the "illegal" cheats. The legitimate way to make the pad appear is to use the Beak Buster on a switch near the level entrance. There's an orange Warp Cauldron that happens to connect to the Treasure Trove Cove area, making accessing the jigsaw puzzle easier.

Another notable feature of this world is the fact that, while one of Mumbo's Skulls exists in every season, Mumbo will only transform Banjo in the spring. In the summer, he's "too hot," in the fall, he's "too busy raking leaves," and he's "on vacation" in the wintertime, with a Beehive there instead to warn the duo. 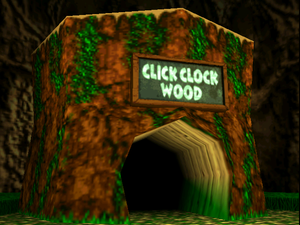