“What's the party for? Grunty got away, so get back up there and finish the job!”
—Tooty, Banjo-Kazooie

Tooty is the younger sister of Banjo and one of the main characters of the first game, Banjo-Kazooie. She is a happy, outgoing Honey Bear who loves adventuring. Tooty does not have a role in any other Banjo-Kazooie game and only has a few cameo appearances.

Tooty playing the flute in the opening for Banjo-Kazooie

In Banjo-Kazooie, Tooty has the role of damsel-in-distress. Her first in-game appearance is during the opening, where she plays her flute.

The game starts with Gruntilda asking who is the prettiest girl of all, to which Dingpot replies that it is Tooty. Enraged, Gruntilda sets off to go kidnap her. Meanwhile, Tooty happily runs up to a molehill in front of Banjo's House in Spiral Mountain, which Bottles emerges from. She asks if he has seen Banjo because she wants to go on an adventure with him. Bottles points to someone in the sky, asking if that is her brother. The character is actually Gruntilda on her broomstick; she swoops down to kidnap Tooty and returns to her lair. Kazooie hears the commotion and urges Banjo to wake up, thus starting their adventure to rescue Tooty.

When Banjo and Kazooie enter Gruntilda's Lair, a cutscene plays, showing Tooty trembling inside a pod of the Beauty Steal Machine, which has a self-explanatory purpose in which Gruntilda tries to transfer Tooty's beauty to herself. Tooty screams for Banjo's help as Grunty closes the pod with Tooty in it.

Tooty is last seen during the ending, in which she is sitting on the beach, eating a watermelon, while Banjo and Kazooie are relaxing.

Additionally, a picture of her can be seen inside Banjo's House. 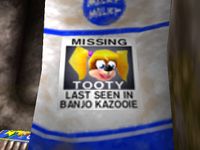 Tooty's appearance on a milk carton in Banjo-Tooie.

In Banjo-Tooie, the picture of Tooty can be seen again inside the remains of Banjo's House, after the place is destroyed by Gruntilda's spell. Tooty also appears as a missing person on the poster of a milk carton inside Guffo's Rubbish Bin in Cloud Cuckooland.

In Banjo-Kazooie: Nuts & Bolts, the picture of Tooty can be seen once again inside Banjo's House, much like in the previous games. In Showdown Town there is a shop named "Tooty Fruity - Fruit Shop." In one part of the game, L.O.G. mentions that he discarded a game world called "Tootyland." A team called "Tooty Angels" is mentioned in the Jiggosseum's scoreboard, where it is stated in the "Baseball" category that they scored 7 points and won against "Pikelet Brown Sox," who only scored 3 points. Lastly, Tooty's name is in some of the trivia questions at the end.

In Super Smash Bros. Ultimate Tooty appears as a spirit. She also makes a cameo in the background of the Spiral Mountain stage, making it her first physical appearance since her debut in Banjo-Kazooie.

“Why, it's Tooty, young and small, she's the prettiest girl of all!”
—Dingpot, Banjo-Kazooie

Described as "the prettiest girl of all" by Dingpot, Tooty wears a red sleeveless shirt with a yellow star printed on the front and purple pants. Her blonde hair is tied up in pigtails which are held together by purple elastics. In the Xbox Live Arcade version, the star on Tooty's shirt appears to be cut in half.

During the game over sequence of Banjo-Kazooie where Gruntilda takes away Tooty's beauty, she becomes a large, green monster with sharp teeth, red eyes, large, long arms and short legs, although the hair and pigtails stay the same as before. Due to her becoming bigger than normal, her clothes get stretched, exposing her stomach.

Tooty is a kind girl who likes to go on adventures with her older brother, Banjo. Unlike her brother, she likes to wander off outside instead of sleeping. She appears to be easily scared as shown in the start of Banjo-Kazooie, freezing in place and Gruntilda comes in her broomstick to kidnap her. Tooty is shown to like music, playing her silver flute both in the introduction cutscene of the game and when Gruntilda is looking at her through Dingpot.