Dream: Land of Giants (codenamed Project Dream or Dream) is an unreleased RPG game that served as the basis for Banjo-Kazooie. It was originally under development for the Super Nintendo Entertainment System and later ported to the Nintendo 64.

The plot revolved around a young boy, Edson, who caused trouble with pirates. The Super Nintendo version of Dream used an isometric perspective and had a fairy tale-like theme. After transitioning to the Nintendo 64, the project became a more complex 3D RPG that had a greater emphasis on the pirate theme. Eventually, Dream was scaled back into a 2.5D linear platform game starring Banjo as the main character. The game was reworked into a 3D platformer similar to Super Mario 64 and would become Banjo-Kazooie.

The only screenshot of Dream made public prior to 2015

For many years, not much information was known about Dream, only one screenshot and some concept drawings were public.

Along with that, near the end of May 2015, Tim Stamper brought up a rumor on Twitter that there were two prototype cartridges for Dream. He had then allegedly found one of the rumored cartridges in his closet in early June, as he then began to tease the fans with a humorous scenario in which he had to capture it. As of current, the cartridge has successfully been captured, and Stamper uploaded photos of the cartridge itself, along with an opened view, showing its internal circuitry, especially the four ROM chips. Stamper has announced on his Twitter on July 20th, 2015, that he is slated to run the cartridge on the SNES.

In July 2015, a blank sprite floppy of Dream, along with storyboard images and concept art sheets, had surfaced on eBay UK. The auction ended on July 19th, 2015.

More info was revealed in December 2015, when Rare published the A Rare Look at Dream video on YouTube. 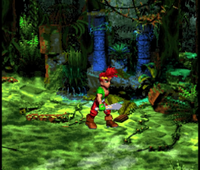 A screenshot of the Super Nintendo version, showing Edson walk in the woods

Dream began development sometime in 1995 by the same development team as Donkey Kong Country 2: Diddy's Kong Quest. The game was an isometric RPG for the Super Nintendo titled Dream: Land of Giants, and it utilized the Silicon Graphics technology of the Donkey Kong Country games but to a more advanced level.[1] The team decided upon the codename Dream because they wanted the game to have a fantastical, magical feel to it.[2] Dream was inspired by Japanese RPGs and LucasArts adventure games, and the team wanted to combine those games into one with a "Rare flavor."[1]

As development progressed, Dream: Land of Giants became too large to fit on a Super Nintendo cartridge, and the Nintendo 64's introduction made the Silicon Graphics technology obsolete. Therefore, the team decided to port the game to the Nintendo 64.[1] Following this transition, the team gradually dropped fantasy-related elements as they did not want the game to become "too childish."[2] Dream was gradually being developed into a much larger RPG, featuring pirates rather than giants. Captain Blackeye was planned as the main antagonist in the Nintendo 64 version.

The Nintendo 64 version of Dream ran into a number of difficulties. According to engineer Paul Machacek, the team spent a lot of time writing level editors and creating environments, but they "couldn't quite get a hook of a game." Steve Mayles deemed Edson as out-of-place among the cast of pirates and "too generic" and nondescript to begin with, so the team experimented with replacing the boy with an animal protagonist.[2] The team tried recycling existing designs for non-playable characters, including "a dopey dog, a rabbit that looked like a man, and a bear." They gave the bear, who would eventually be named Banjo, a backpack for storing his adventuring items and had him become the new protagonist. The game was too ambitious for Nintendo 64 hardware, as it lacked the processing power to maintain the environments at a steady framerate; taking inspiration from Twelve Tales: Conker 64, a recently developed title of the time, the team decided to recreate a different 3D platformer game that would become Banjo-Kazooie.

There is a known demo of Project Dream featuring a full introduction sequence and one level. The player would take control of Edson, a young boy wielding a sword, and he had a newly-befriended pet dog, Dinger, who assisted him during his adventure. Dinger had a primary ability of digging for buried objects and scampering off independently from Edson. The level took place in a forest and swamp filled with trolls, whom Edson would fight with his sword. Occasionally, a massive dinosaur (only seen by its large foot) would attempt to crush Edson, and the shaking leaves and virtual camera warned the player when the dinosaur was approaching. 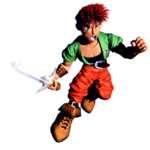