The name of this article is conjectural. If an official title is found, move the article to that name and add a source. 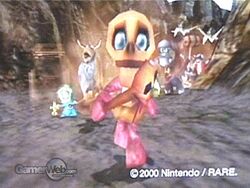 Screenshot of the tech demo, showing Mumbo Jumbo running away from many Banjo-Tooie enemies.

The Space World 2000 tech demo is a video created by Rare to showcase the power of the then-upcoming "Project Dolphin" with many characters from two of their then-upcoming games, them being Conker's Bad Fur Day and Banjo-Tooie, running in the Dolphin engine.

The first half of the video focuses on many Stone Giants dancing in the Rock Solid dance club from Conker's Bad Fur Day, while the second half shows Mumbo Jumbo, Banjo & Kazooie running away from a crowd of characters and enemies from Banjo-Tooie, like Klungo, Soarasauruses, Tintops, and many more. The area in which they are running in has been said to look similar to the canyon from the introduction cutscene to Diddy Kong Racing, although modified.[1]