Banjo-Kazooie: Grunty's Revenge is a top-down Banjo-Kazooie game and the third of the series, developed by Rare Ltd. and released for the Game Boy Advance in 2003. The story takes place two months after Banjo-Kazooie, and involves Mecha-Grunty attempting to make it so that Banjo and Kazooie never meet by messing with time.

Two months after Gruntilda was buried under a rock in Spiral Mountain in the original Banjo-Kazooie. As no matter how much he tried, Klungo couldn't push the rock and unblock his master, he built her a mechanical body to host her spirit and get revenge on Banjo and Kazooie. Mumbo Jumbo, who watched everything behind a bush, rushes to warn Banjo about the witch's return but she still manages to kidnap the bird, forcing the shaman to send the bear back in time so he can rescue his friend and stop Gruntilda once again.

Banjo then arrives at Spiral Mountain from the past and meets Bottles' ancestor, Bozzeye, who offers to teach the bear and, eventually, Kazooie too the moves they have forgotten due to the time travel's side effects in exchange of Musical Notes. He eventually rescues his friend in Breegull Beach, and the two continue to gather Jiggies for Master Jiggywiggy in order to enter Gruntilda's Lair and defeat her spirit.

After Gruntilda is defeated, she is sent back to the present time and orders Klungo to send a message to her sisters, Mingella and Blobbelda, so they can break the rock as the minion would never be able to. If the game is not 100% completed, Mumbo from the past uses a spell to send Banjo and Kazooie back to the present but fails and they reach their house with various copies of each other. If the game is 100% completed, however, they meet three purple Jinjos who are commemorating how Gruntilda was defeated and they'll finally be able to reclaim their homeland, Spiral Mountain. A scene of Mumbo and Honey B doing the "bee dance" inside Mumbo's Skull is then shown, with the shaman saying he might even be able to show her his "special transformation." 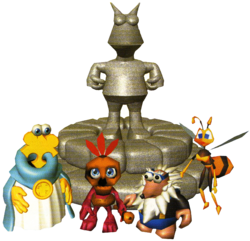