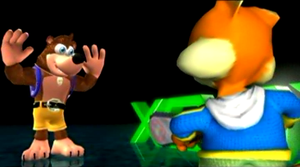 Conker threatening Banjo with his chainsaw in the video.

The Rare on Xbox Promo Movie[1] is a promotional video made to showcase Rare and Microsoft's new partnership for Xbox hardware, which was shown as part of their X02 press event in Seville on September 24, 2002. The video features four characters from Rare's games, them being Joanna Dark from Perfect Dark, Conker from Conker's Bad Fur Day, Banjo, and Kameo from the then-upcoming Kameo: Elements of Power.

The video first starts with Joanna Dark walking in a dark environment, then using her gun to shoot Conker in the letter "O" of an Xbox logo. After this, Banjo comes to pull Conker out of the logo, then speaks in gibberish about the Rare acquisition, which Conker doesn't understand a word of. Conker then gets tired of Banjo's gibberish, pulls out a chainsaw, then reshapes the "Xbox" logo to spell "Rare." Kameo then flies down in front of Conker, which excites him and makes him throw his chainsaw to the side, hitting Banjo and making his backpack fly off of him. She then grabs Conker, puts him in her pockets, and then flies away.