L.O.G.'s Lost Challenges is a DLC Game World in Banjo-Kazooie: Nuts & Bolts, released on April 7th, 2009 for 400 Microsoft Points. It takes place in the Test-o-Track, and reuses many assets from the regular game such as character costumes.

L.O.G.'s Lost Challenges works differently from other Game Worlds. In it, collected Jiggies do not go to a Jig-O-Vend outside the Act Door but instead are added to a large Jiggy board in the Game World. To fill the board, each challenge needs to be played twice: once in a pre-made vehicle and once in a custom vehicle, as the Jiggies placed by only beating the L.O.G.'s Choice versions are black and white and need to be colored by beating the Player's Choice version which are harder. Collecting every black and white Jiggy adds concept art for the game to the gallery in the pause menu that can only be seen while in the Game World, while completely filling the entire board with colored Jiggies unlocks more concept art, that works the same way, and allows Klungo's newest game, Hero Klungo Sssavesss Teh Universsse, to be played by talking to him.

T.T. Trophies in L.O.G.'s Lost Challenges don't serve any purpose as they don't add any Jiggies to Trophy Thomas' Jig-O-Vend in Showdown Town. Collecting them all, however, makes T.T.'s house gold, which is purely cosmetic and also serves no purpose. 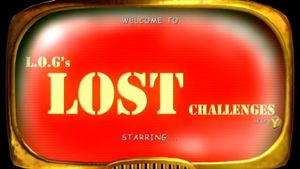