Not to be confused with Puddles.

“Plenty of milk for me, Winkybunion!”
—Piddles, Banjo-Kazooie: Nuts & Bolts

Piddles is the sidekick of Gruntilda and the secondary antagonist of Banjo-Kazooie: Nuts & Bolts. She was created by the Lord of Games as a replacement for Klungo, who had gone off to make "ssstupid gamesss." 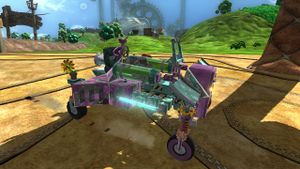 In Banjo-Kazooie: Nuts & Bolts, Piddles is created by the Lord of Games after Gruntilda asks what she would get to aid her in the game (as Banjo and Kazooie had already recieved Mumbo's Wrench). After seeing her for the first time, Gruntilda immediately kicks her far away. Piddles then, angry, jumps and bites the wire behind her connecting the container holding Gruntilda's skull to her body, causing her to run away with the Gruntbots following her.

Piddles is later found in Nutty Acres, where she is raced against. She was originally supossed to race Trophy Thomas, but he was unable to because his "top racing tractor" was being repaired. When Piddles is defeated, Trophy Thomas thinks the duo stopped the game and swopped something to win.

She appears again in the Act 3 of LOGBOX 720, being sent by Gruntilda to polute the glubber pool of the console with cat litter, what would cause Bottles to have to shut it down. For Banjo and Kazooie to stop Gruntilda's plan, they need to win a race against her. After the race is won, Gruntilda will say that "this cat's worse than Klungo, if [she's] being frank."

In Banjoland, Piddles aids Gruntilda by using the Grenade Turret to shoot the duo.

In the final battle at Spiral Mountain, Piddles assists Gruntilda by using various weapons while atop her vehicles. After being defeated, Gruntilda's skull falls off the container that holds it, but Piddles knocks it back in. Due to their loss, the witch and the cat are both sent to L.O.G.'s Videogame Factory to work there forever.

In the game Hero Klungo Sssavesss Teh Universsse, two copies of Piddles appear in the background (although only one can be seen normally), but much bigger and ferocious-looking, being apparently sent by Gruntilda to attack Klungo.