Banjo's House is the residence of Banjo, Kazooie and their pet goldfish, Roysten. The house is located in Spiral Mountain. It has appeared in every Banjo-Kazooie title to date, except for Banjo-Pilot. The interior of Banjo's House serves as the main menu in most of its appearances, and is the first location to appear in each of its appearances. 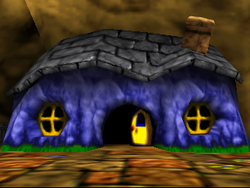 The first appearance of Banjo's House in Banjo-Kazooie

Banjo's House is a small, blue house featuring yellow window casings and a door. There are small patches of grass growing in front of Banjo's House. The roof is made up of shingles, and there is a brown chimney on top. The chimney does not appear in Banjo-Tooie. The interior consists of a single large room with a bed, living room, and kitchen. The bedroom portion is on the left side, with a cuckoo clock at one side, a drawer and coat rack on the other side, and curtains behind the bed. Banjo uses the coat rack to hang his backpack. The living room is on the right side, featuring a blue sofa chair, a fireplace, and two shelves with books. The small kitchen appears straight across from the door. A large green rug appears in the center of the house.

A couple of portraits are shown inside the house, including one of Bottles (where they can play Bottles' Moving Picture Game later in the game), one of Tooty, one of the beach location in the ending, and a portrait of Banjo in an area reminiscent of an earlier, 2.5 build of Banjo-Kazooie. In Banjo-Tooie the house received significant damage, and the interior was entirely damaged.

In Banjo-Kazooie: Grunty's Revenge the house has a purple outer wall and silver roof tiles.

In Banjo-Kazooie: Nuts & Bolts the house is in a state of repair and age. The outer wall is cracked, exposing a series of bricks inside. There are wooden planks built around the house, and a few covering the broken window; some yellow planks surround the bottom of the house. The yellow door is replaced with a wooden door, which has letter signs on it, each spelling out a letter of "BANJO" (the 'A' is hanging upside-down). Some of the roof tiles are also missing. At the end of the game, Jolly Dodger repaints Banjo's House to pink, with a yellow roof and white trim around the windows.

Banjo inside of his house in Banjo-Kazooie

In Banjo-Kazooie, the file selection takes place in Banjo's House. When the player selects File 1, Banjo is shown sleeping in his bed. File 2 shows a scene of Banjo cooking at his stove. Lastly, File 3 shows Banjo sitting on a sofa chair playing a Game Boy.

In the opening, Tooty goes to visit Banjo at his house, only to be kidnapped by Gruntilda. Inside, Kazooie wakes up from the commotion while Banjo is still asleep. She wakes up Banjo and they go to investigate.

The duo can optionally enter inside of Banjo's House. If Banjo and Kazooie manage to obtain a Jiggy from the Sandcastle, they can play Bottles' Moving Picture Game by talking to the Bottles portrait in the living room. An Extra Life statue can also be found outside the house, hovering above the chimney.

Banjo inside of his destroyed house in Banjo-Tooie

In Banjo-Tooie, Banjo, Kazooie, Mumbo Jumbo, and Bottles are playing cards inside on a dark and stormy night. When Grunty is freed from beneath a rock by her sister, she fires a spell at Banjo's House. Mumbo and the others evacuate, although Bottles believes it to be a trick, it fatally fires Bottles (who stayed inside when the others escaped) in the process.

Like the previous game, Banjo and Kazooie can optionally explore inside the house. The furniture and items were destroyed in the opening cutscene, and the interior is shown to be nearly empty. Black stains appear all over the walls and floor as a result of the spell.

Banjo's House briefly appears in the opening and ending scenes of Banjo-Kazooie: Grunty's Revenge. Unlike the previous two games, Banjo and Kazooie are unable to explore inside the house. 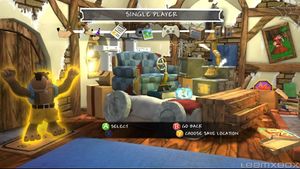 The main menu is in Banjo's House in Banjo-Kazooie: Nuts & Bolts.

In Banjo-Kazooie: Nuts & Bolts, the main menu takes place inside Banjo's House another time, the third time in the series. The interior is a lot more unorganized than in Banjo-Kazooie given all the furniture stacked on top of each other. A photograph depicting Bottles's in-game appearance from Banjo-Kazooie is also hanging on the wall.

In the opening for the game, Banjo and Kazooie are lounging outside of Banjo's House. Banjo is listening to the radio while Kazooie playing a game with an Xbox 360 controller and headset. The house is poorly maintained because Banjo and Kazooie never bothered to finish repairing it after the events of Banjo-Tooie. A nearby tombstone of Bottles (a reference to his death in Banjo-Tooie) and a dumpster are located near Banjo's House.

During the ending, Jolly Dodger repairs the house and repaints it pink. Also, by defeating Gruntilda at the end, a stack of Xbox 360s and a box containing Kazooie's moves appear inside the house.

Like in Banjo-Kazooie: Grunty's Revenge, Banjo and Kazooie cannot explore inside their house. However, there is a bug allowing Banjo to clip inside his house. The house has a different interior appearance during main gameplay than from the main menu.

In Super Smash Bros. Ultimate, Banjo's House is visible in the background of the downloadable Spiral Mountain stage. Its design is a mixture of its original, undamaged appearance from Banjo-Kazooie, and its updated appearance in Nuts & Bolts. Also like in Banjo-Kazooie, an Extra Life statue can be seen hovering above the chimney.