The Broomstick is a recurring character and Gruntilda's primary mode of transportation. Various iterations of this character appeared throughout the series, such as its first version in Banjo-Kazooie which had green eyes and a mouth.

The Broomstick first appeared in Banjo-Kazooie. Gruntilda is first seen using it at the start of the game, where she uses it to kidnap Tooty. After being absent for the majority of the game, the Broomstick is again used by Gruntilda when Banjo and Kazooie win the Grunty's Furnace Fun. It then is finally used in the final battle against the witch, where she tries to attack the duo by swooping down in the Broomstick while it opens its mouth. Sometimes, the broomstick will stop and smoke will come out of it. While Gruntilda tries to fix it by hitting it, she's vulnerable to attacks. Later in the battle, Grunty will start using the broom to stay of reach and avoid most of the duo's attacks. After being attacked by the Mighty Jinjonator, the broomstick will be destroyed and Gruntilda will fall off her tower into a hole in the ground.

The Broom's model is revealed by Brentilda to be either a Super Gutlifter Pro, a Lardmaster 2000, or a Rough Rider Deluxe, depending on the save file. A painting of the Broom also appears in Mad Monster Mansion's dining room as one of the seven pictures

The Broomstick is mentioned in Banjo-Tooie after Klungo is defeated for the first time. As he leaves to Gruntilda, he asks that she would "please beat [him] with Broomssstick."

The Broomstick Cup from Banjo-Pilot

In Banjo-Pilot, the Broomstick appears as the symbol of Broomstick Cup from Grunty GP. The Broomstick has a largely different design from its previous iteration, being a small broom with yellow bristles and googly eyes on the handle. 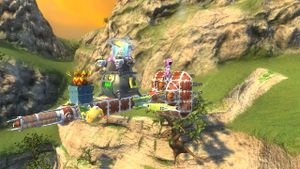 In Banjo-Kazooie: Nuts & Bolts, Gruntilda uses a vehicle version of her Broomstick as the fifth (and most difficult) part of the final battle. The vehicle has a laser and a Clockwork Kaz, adding to the fight's difficulty. It also has two Mumbo Bombos and Piddles using the Egg Turret. The Broomstick is very quick, making it hard to attack. To defeat it, Banjo and Kazooie must knock Gruntilda off her seat.

In Super Smash Bros. Ultimate, the Broomstick makes a cameo appearance on the Spiral Mountain DLC stage. Gruntilda swoops in on riding the Broomstick when the camera rests with her lair in the background. Its appearance is based on its original design from Banjo-Kazooie.