Before the development of Banjo-Kazooie started, the game started out as Dream: Land of Giants, an adventure RPG game with an isometric perspective for the Super Nintendo Entertainment System. The game was about a boy named Edson causing trouble to Captain Blackeye and his crew. The development for the game later moved to the Nintendo 64. 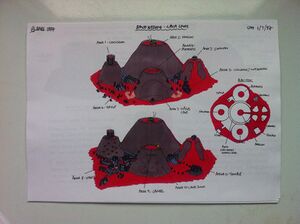 Level concept design for the Lava World, showing the layout and general overview of the world.

The Lava World[1] was a lava-themed world that was planned to be included in Banjo-Kazooie, but was scrapped due to time constraints. The concept was eventually re-purposed into the lava side of Hailfire Peaks in Banjo-Tooie, with numerous differences, although a number of aspects of the original concept were retained, such as a dragon boss, a coliseum, and making Gobi spit up water to use as coolant.

The Lava World is referenced in both Banjo-Kazooie and Banjo-Tooie, as well as its development history between both games. In the first game, when Banjo and Kazooie steal Gobi's water again in Click Clock Wood, he says that he is leaving for "Lava World," where the duo cannot find him. There is a camel shown in the Lava World's original design sheets, which strongly suggests that Gobi left for the Lava World. In Banjo-Tooie, Gobi is first found in Witchyworld, where he tells Banjo and Kazooie that he was captured on the way to Lava World. When he is freed, Gobi goes to the "Lava World," revealed to be the lava side of Hailfire Peaks. 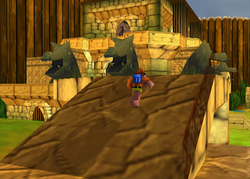 The Temple Test Level[2] is a test area created during development of Banjo-Kazooie, and was commonly shown in pre-release promotional material. The test level consists of a towering temple structure with multiple doors, surrounded by stone ramps and sandy terrain. The area is fully enclosed with wooden plank walls. The purpose of the level was to test 3D level design, and to aid in developing the moveset for Banjo and Kazooie.[2] The gargoyle statues surrounding the temple were adapted from a scrapped troll character design from the SNES prototype of Dream.[3] 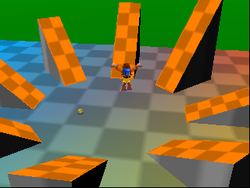 In the data for Banjo-Kazooie, there is an unused test map with eight slopes arranged in a circle formation. All the slopes are too steep for Banjo to walk on, but can be walked on while using the Talon Trot move. This map only exists in the US 1.0 version of the game.