“Boggy's so lazy nowadays. Can't you just take him with you on your adventures?”
—Mrs. Boggy, Banjo-Tooie

Mrs. Boggy is a character in the Banjo-Kazooie series. She lives in an igloo with her husband, Boggy, and their three children: Soggy, Moggy and Groggy.

In Banjo-Tooie, Mrs. Boggy can first be found in Witchyworld, where she was visiting the theme park with her children, Soggy, Moggy and Groggy. The four ended up getting separated, leaving Mrs. Boggy alone at the entrance where she told the three to meet her. Eventually, she encounters Banjo and Kazooie and asks them to bring her kids back to her. Once the three polar bears are brought back, Mrs. Boggy scolds them for running off and rewards the duo with a Jiggy, then goes back to her home in Hailfire Peaks.

She can later be found inside her igloo in the icy side of Hailfire Peaks alongside the rest of her family.

Although she does not appear physically in Banjo-Kazooie: Nuts & Bolts, Mrs. Boggy is mentioned several times by her husband, Boggy. According to him, she kicked him out home, what forced him to get a job to pay for the rent. He ended up buying Mr. Fit's old gym in Showdown Town. He also mentions it has been a while since she last time she fed him and that she sometimes slaps him.

In Banjoland, as part of the mission "Home Improvements: Igloo Edition," Boggy says that Mrs. Boggy asked him to "pull [their igloo] down and start over" to build a new one, as it was currently "old-fashioned and embarrassing." To help him, Boggy asks for Banjo and Kazooie to demolish it so he could start rebuilding. 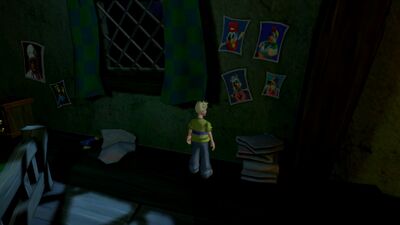 In Grabbed by the Ghoulies, a picture of Mrs. Boggy can be seen in the Dunfiddlin Cottage room of Ghoulhaven Hall.