Warp Pads are pads used to teleport certain characters to specific locations of a world instantly, making navigating through it easier. 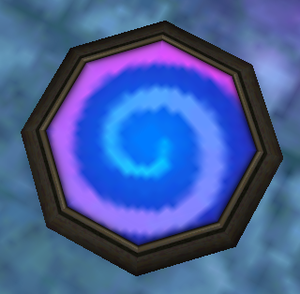 In Banjo-Tooie, there are usually five Warp Pads in each world, with the exceptions being Cloud Cuckooland and Cauldron Keep, which only have two, and the Isle O' Hags which has Jamjars' Silos instead. Warp Pads need to be stepped on in order to be activated and used by pressing

While Banjo, Kazooie, Mumbo Jumbo and most of Humba Wumba's transformations can use Warp Pads, certain characters cannot, such as the Golden Goliath, Daddy T-Rex Banjo and Washer Banjo. Some also cannot warp to specific pads, such as Mumbo Jumbo going to Wumba's Wigwam in Glitter Gulch Mine and Submarine Banjo going to the town plaza of Jolly Roger's Lagoon.

“Alas, No. The warp system is built to transport vehicles. Not of bunch of animals running on foot like. Well... like animals. Hop back into your Trolley and try again”
—Lord of Games, Banjo-Kazooie: Nuts & Bolts