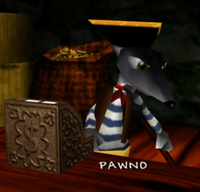 In the ending character parade of Banjo-Tooie.

Pawno is a sly gray weasel and the owner of a pawn shop in Jolly Roger's Lagoon. He has a peg leg as his left leg, and it is supported by a crutch.

In Banjo-Tooie, when Banjo and Kazooie first encounter Pawno, he offers a Jiggy to them for twenty doubloons. After that is bought, a Cheato Page will be for sale for five doubloons. These are the only items he has for sale. If Kazooie enters Pawno's shop by herself and tries to buy either item but does not have enough doubloons, Pawno makes a comic remark of how Kazooie "can't pay with eggs."

In Banjo-Kazooie: Nuts & Bolts, Pawno is mentioned in the description of Boggy's Igloo in Banjoland. It is said that the T.V. in the igloo was stolen, and "Pawno sold a similar model soon after Kazooie was spotted in Jolly's bar," implying he was the one who stole it.

Pawno was originally planned to run a shop in Showdown Town, however, but was cut from the final game.[1]