Wumba's Wigwam is a large teepee and the residence of Humba Wumba in Banjo-Tooie. It contains a purple pool that, once a Glowbo has been thrown in it, can be used to transform Banjo into various different forms. It is found in every world, except for Spiral Mountain and Cauldron Keep.

In some worlds, Wumba's Wigwam has special properties not present in other worlds. In the Pine Grove of the Isle O' Hags, Humba Wumba does not accept regular Glowbos. Instead, she requires the legendary Mega-Glowbo which allows her to transform Kazooie into a fire-breathing dragon. In Glitter Gulch Mine, a Warp Pad is found inside the wigwam which Mumbo Jumbo is denied access to by Jamjars if he attempts to use it. In Terrydactyland, Mumbo can enlarge and shrink Wumba's Wigwam to allow her to alternate between transforming Banjo into a baby and a grown T-Rex. The one in Grunty Industries is apparently made of metal, although that does not change anything. In Hailfire Peaks, Wumba's Wigwam is found in the Icy Side and has a tunnel that leads to Mumbo's Skull in the Fire Side.

If Mumbo Jumbo enters Wumba's Wigwam, she tells him to "leave now or be in big heap trouble" and to get out of her pool if he swims on it. 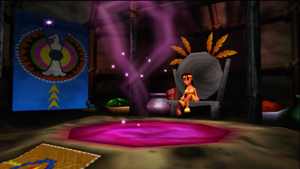