Big Al is an insanitary rhinoceros employed in Witchyworld. He operates the theme park's burger stand, titled "Big Al's Burgers." Big Al is unsure of how he got a job in the food service industry, but according to him, he used to clean the park's toilets before being assigned to his current position.

Big Al has poor hygiene; although he has a terrible cold, he often coughs and sneezes on the food that he serves. He also admits to selling burgers that have fallen on the ground. According to Gregg Mayles, he was based off a real person.[1]

In Banjo-Tooie, when Banjo and Kazooie first enter Witchyworld, Big Al's burger stand is closed. The duo can open it by activating a switch on top of the ticket booth in front of the Witchyworld entrance. As the joint opens, Al considers putting the burger back on the grill, thinking that "punters" will not find out, but then realizes that the booth is open.

When Big Al's Burgers opens, Banjo and Kazooie can get a burger from there. Before selling a burger, Big Al offers fries to the duo but then admits they are sold by Salty Joe instead. Big Al only gives one burger at a time, because each time he claims to have run out but would root around for more. Banjo and Kazooie can obtain another burger from Al they leave or re-enter Witchyworld.

Big Al's Burgers is later mentioned at Hailfire Peaks after Banjo and Kazooie defeat Chilli Billi, who says he is going for "a couple of Big Al burgers" before flying away. 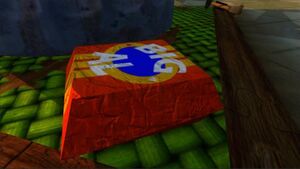 The burger box found in Banjoland.

In Banjo-Kazooie: Nuts & Bolts, various signs throughout Showdown Town have a logo with "Big Al's Burgers" written in them. Additionally, a paper buger box with Big Al's name written in it can be found next to the Rubbish Bin exhibit of Banjoland.