“I come from a golden age where wolves were kings... The name's Sabreman. Adventuring is my game... or, at least, was my game.”
—Sabreman, Banjo-Tooie

Sabreman is the main protagonist of the Sabreman series, who has made a number of guest appearances in the Banjo-Kazooie series. He is an old British explorer wearing a pith helmet. 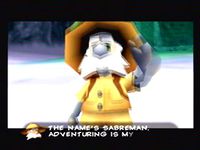 Sabreman, immediately after being revived with Mumbo Jumbo's magic.

In Banjo-Tooie, Sabreman can be found frozen in the icy side of Hailfire Peaks, holding the Wulf Amulet. To melt the ice and rescue him, Banjo and Kazooie must use Mumbo Jumbo's help to first bring him back to life with a Mumbo Pad. This will cause the adventurer to gain consciousness again and claim to have reached there while being chased by the Sabre Wulf in 1984 (a reference to the year where Sabre Wulf, the first entry of the Sabreman series, released) and ending up getting frozen by Chilly Willy. Then, the duo needs to heat him up. This can be done in various ways, such as by firing Fire Eggs, using the Hatch move or using Dragon Kazooie. After that, he asks for Banjo to take him to his tent, where he left all his equipment. This can be done by using the Taxi Pack move. There, he rewards the bear and bird with a Jiggy and starts to sleep.

In Banjo-Pilot, Sabreman can be seen as an obstacle in Jolly Roger's Lagoon.